"Wake up and smell the Chicago."

That's the apt summation given by Glenn "Instapundit" Reynolds as he offered links to a number of stories concerning the news that the IRS was targeting Tea Party-affiliated groups for additional scrutiny.

As alert readers of this feature know, I spent five years in Chicago, from 1987 through 1992. When I first came to Chicago, Harold Washington was the mayor. By the time I left, the Daley restoration had taken place. While it would be an overstatement to say that Washington was a reformer, he had made some efforts to change the long-standing system of spoils, patronage and intimidation that is the hallmark of Chicago politics. By the end of 1992, the spoils system was back in high gear.

It was in this time frame that Barack Obama came to Chicago and began his political ascent. We have heard that somehow Obama wasn't really part of all the usual corruption and self-dealing, that somehow he rose through the system without becoming tainted by it in any way. We saw a variation of this claim from Ace Commenter Rich earlier this week:


First off, let me thank you for printing the litany of failed Conservative Talking points you guys have been peddling for 5 or 6 years now. It's quite amusing, and gives me a warm fuzzy when I go down the list: TUCC-fail!, Bill Ayers-fail!, Khalidi-fail!, Daley-fail!, Blagojevich-fail!, Wright-fail!, Pfleger-fail!, Jackson-fail! and now, we can add Benghazi! Almost chronological too.

Yeah, it's all warm and fuzzy stuff -- all those nasty Republicans stepping on rakes. Since "The Great Gatsby" is on our minds again because of Baz Luhrmann's movie version being out in the theaters now, I'm reminded of this exchange from the book:

Who is he anyhow, an actor?"

"Fixed the World Series?" I repeated.

The idea staggered me. I remembered, of course, that the World Series had been fixed in 1919, but if I had thought of it at all I would have thought of it as something that merely happened, the end of an inevitable chain. It never occurred to me that one man could start to play with the faith of fifty million people--with the singlemindedness of a burglar blowing a safe.

"How did he happen to do that?" I asked after a minute.

"He just saw the opportunity."

For a long time now, that's been the conceit. They can't get him, old sport. There's nothing to all these stories. It all happened a long time ago. What difference does it make? Forward. Yeah, it's easy to see why that would make people feel all warm and fuzzy.

It's never occurred to a lot of people that one man could play with the faith of a lot more than fifty million people. And it's taken a lot of enabling to get to this point. We've seen assertions like this:


President Barack Obama goes into the 2012 with a weak economy that may doom his reelection. But he has one asset that hasn’t received much attention: He’s honest.


You can't even say it's election-year politics because the Republicans have been pounding this thing for over a year now. And not just the Republicans in Congress, the entire right-wing media propaganda empire has really seized on this because President Obama, his administration, has been remarkably scandal free. Really.


But I do think there are a couple of things that are character-logical that will guard against some of the common flaws of second terms. First, he’s a man of high integrity who has run a very clean administration. You can argue with this or that or behavior. There have been signs of insularity and arrogance, but there have been no scandals. And the rate of scandals plaguing second terms is extremely high. I think he’s less prone to that.

Did you believe those assertions? Or have you received this message? 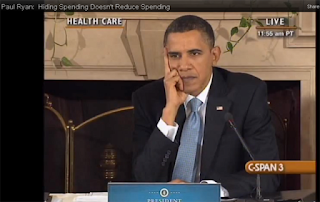 Maybe Ace Commenter Rich's triumphalism will prove out and he'll be able to add this week's revelations to the list of "fail!" that makes him feel so warm and fuzzy. I'm not so sure, though, when you have the Washington Post weighing in with this level of outrage:


One line of questioning should focus on how the IRS’s procedures failed to catch this “shortcut” before its employees began using it. Another should center on how this misguided practice came to light, and on what the IRS planned and plans to do about it. Ms. Lerner was responding to a question when the news first came out; it’s not clear whether the government intended otherwise to disclose what had happened. Nor have officials been clear whether disciplinary measures have been taken.

Did some officials hope never to reveal this wrongdoing? Did others hope it could quickly get lost in the weekend news cycle? Misguided, if so. We hope to hear Democratic leaders as well as Republican ones loudly saying so.

Democrats holding this administration to account? Now that would be a reason to feel warm and fuzzy.
Posted by Mr. D at 10:45 AM

it has been commonly suspected/acknowledged for decades that the IRS was used as a weapon against political foes: insiders knew of it during the JFK administration, and it became insider info during the RMN administration.

as a blossoming operative during the 90's, we used to speak of it regularly. LOL, lots of LOL....

just best watch yer i's and t's, per the IRS...
we all knew that.
it wasnt just punchline, it was a fact.
a fact of life, part of the game... accept that, or get out of the game.

the only thing new here is public acknowledgement by the IRS itself.

is it wrong?
of course it is.
but the fact still remains: it is.

if you wanna play, you need to know the rules, even the unpublished ones.

You know, I'm not seeing any evidence that Carter, Ford, Reagan, or either Bush were credibly accused of this. Just Clinton and Barack Milhous Obama.

I'm guessing that this might have something to do with not necessarily great Republican (and Carter) virtue, but simply that GOP Presidents know that career government workers are unlikely to let something like this "slide." Clinton and Obama, not so much.

Be not afraid, citizens. This was merely a case of lower-level, overenthusiastic government bureaucrats. They will be severely punished and transferred to the Obamacare rationing oversight committee.

Mark,
I am sorry that you lived in Chicago for 5 years, and didn't seem to learn much about Illinois politics. First of all, it isn't Chicago that is corrupt...it's the entire State. If you knew anything, you would know that. Secondly, you can rise to power in Illinois without being part of the power structure. If you think I am wrong, then tell me who is Pat Quinn's Chinaman? We have a sitting, re-elected governor who has run against the combine his entire life. That doesn't mean he doesn't know that it exists. It doesn't mean he is naive and wandered into the office of the Governor one day, and somebody stuck a Bible in his face and asked him to take an oath. It does mean that guys like him, and Obama, and Jim Thompson made their ways on their cunning, a little guile, and serious political chops.

For God's sake, Obama had no say in who was going to replace him in the Senate? Do the math.