Anyone who claims to be a Nazi in 2017 is contemptible. There's no future in it, only the lingering stench of evil. It's a path to ruin in this world and perdition in the next.

The Nazis came to Charlottesville this past weekend. It did not go well:


Brittany Caine-Conley, a minister in training at Sojourners United Church of Christ, arrived in downtown Charlottesville on Saturday morning expecting that there might be violence. She did not expect things to get out of hand so quickly.

But what began as a rally of white nationalists in a city park soon spun out of control, resulting in melees in the streets and the death of a 32-year-old woman after a car rammed a group of counterprotesters. The police have charged a 20-year-old Ohio man described as a Nazi sympathizer, accusing him of intentionally driving his car into the crowd.

The police didn't do much to stop the violence, it appears. More from the New York Times:


But if Charlottesville was grieving on Sunday, it was also questioning. Governor McAuliffe fiercely defended the police in an impromptu sidewalk interview, noting that many of the demonstrators were armed, and saying the officers had done “great work” in a “very delicate situation.” And he said Ms. Heyer’s death, which he called “car terrorism,” could not have been prevented.

“You can’t stop some crazy guy who came here from Ohio and used his car as a weapon,” Governor McAuliffe said. “He is a terrorist.”

But others, including Mr. Kessler and Ms. Caine-Conley, openly wondered if the violence could have been prevented.

“There was no police presence,” Ms. Caine-Conley said. “We were watching people punch each other; people were bleeding all the while police were inside of barricades at the park, watching. It was essentially just brawling on the street and community members trying to protect each other.”


As the white nationalists massed in the park, Ms. Caine-Conley and other members of the clergy locked arms in the street. Behind them were hundreds of protesters, including black-clad, helmet-wearing members of the far left known as antifa.

Brian Moran, Virginia’s secretary of public safety and homeland security, was watching the events from a command post on the sixth floor of a Wells Fargo bank on the downtown mall. There were sporadic fights. “I compare it to hockey,” he said. “Often in hockey there are sporadic fights, and then they separate.”

Suddenly, people were throwing water bottles, some filled with urine. Some used pepper spray; from his perch on the sixth floor, Mr. Moran saw smoke bombs being thrown. People started clubbing one another. The clergy retreated to a “safe house” — a restaurant nearby.

But according to many witnesses, the police waited to intervene. Ms. Caine-Conley called it “fascinating and appalling.”

Fascinating and appalling is an apt description of this entire moment. Look at the faces of two people who have been involved in hurting or killing others in the name of their ideology: first the accused driver of the car in Charlottesville, James Alex Fields: 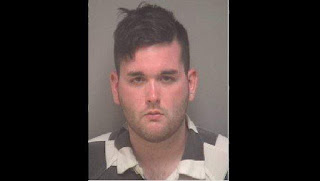 Then, Linwood Kaine, a son of Sen. Tim Kaine who was arrested for his role in attacks of Trump supporters at the Capitol in Saint Paul earlier this year: 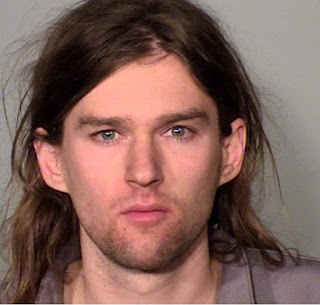 The dazed yet baleful expressions are the same. The only obvious difference is tonsorial. Is one young man more worthy than the other? It's easier to predict their fates. Fields will be going to prison, and maybe death row. Kaine won't. Fields may not have had a great future before he drove his car into a crowd, but he has no future now. Kaine will have the opportunity to leave his past behind.

It must be said again. Fields is not a victim; he's chosen perdition. Still, the sound of John Fogerty's "Fortunate Son" blends in with the stench of Fields. Even as we make a point of condemning Fields and his ilk, we ought to remember he's hardly the only combatant in this war.
Posted by Mr. D at 6:02 AM

As a note, Woody Kaine hasn't killed anyone, yet.

I'm also fascinated by a photo I saw of a "White Nationalist" holding a Nazi flag. Both the flag and his "tactical pants" were still deeply creased as if just unwrapped. As I asked on another site, in a time when it is all but impossible to buy a Confederate Flag, where do people buy their Nazi flags. And might an enterprising reporter or investigator find that a large number of flags were recently purchased and by who? Could the Antifa and Nationalist flags have been funded by the same source?

I also wonder if there isn't a Central Casting office for rioters, offering one-stop shopping for all your protest needs, regardless of ideology, uniforms provided.

As a note, Woody Kaine hasn't killed anyone, yet.

Right, but his pals will get the job done eventually, even if he isn't personally involved. One blow from the club, one head bounce on the curb, and the deed will be done.

They're both angry white dudes who want to fight, but there is a whole lot less difference in their respective ideologies than either of them would care to admit.

When antifa sets fire to occupied buildings its like not big of a deal ... Seems one side gets a pass while another side triggers a storm of virtue signaling.

At what point do we recognize acts of domestic terror as acts of war?

Who started this battle? Who drew first blood? I think there is a reason why no reporter is reporting on these questions... And the guy driving the car may have just been engaging in a counterattack seeing as how the cops always give antifa a wide berth.

If you're wondering where to find such flags, ten seconds on Google will get the job done. Sears and Wal-Mart used to sell Confederate flag beer pong tables, too--wouldn't General Lee be so proud?

Agreed that fascism, for all that people talk about how "conservative" it might be, does double back to Communism at the end of the day. We are forgetting, it seems, how to disagree without being disagreeable. Or, at a more basic level, we are forgetting how to come up with a worldview that is not criminal in its application. Or at least the fringes of our political world are doing so.

Cops appear to stand down, mayor is a democrat (Michael Singer), flags appear to be just out of the bag, protest organizer is a former Obama booster. If you want to make people suspect a rat, hard to do better than that.

Cops appear to stand down, mayor is a democrat (Michael Singer), flags appear to be just out of the bag, protest organizer is a former Obama booster. If you want to make people suspect a rat, hard to do better than that.

On the flip side, I looked up the bios of the other eight or so speakers scheduled, and they all appear to be the genuine article. The only thing that really surprised me was the head of the League of the South participating, as I'd thought they'd at least pretended to some sort of respectability. So either I was wrong, or they changed, or both.

If it was indeed a setup, there was evidently some art going on to get all these guys to sign on without someone suspecting a rat. Looking at their bios, there are a few guys who qualify as smart, if not as wise or moral.

Won't be holding my breath, but it would be very interesting to see what a good investigation of this would find. Maybe we could even sideline both the "far right" and the "far left" and make some progress as a country.

"At least Lynwood Kaine has not killed anyone" I would not be too sure of that: The Antifa guy who attacked the Grey car that started the chain of events that led to the death of Heather Heyer in Charlottesville has an uncanny resemblance to Tim Kaine's son. http://dailysignal.com/.../170814_CVilleedit-1250x650.jpg Under the principle of first criminal action leading to death, that Antifa member could be charged with murder.