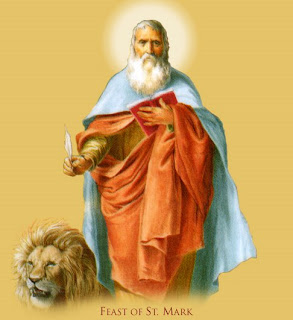 It's not one of the big ones in the church year, but today is the feast day of my patron, St. Mark. The story goes that Mark was an early follower in the Church associated with St. Paul and St. Barnabas. He wrote the second Gospel around 60 A.D. and later went on to Alexandria in Egypt, where he was one of the first people involved in establishing the Church there. He was martyred around 68 A.D.

The Gospel of Mark is the shortest of the four and it is said that, since Mark was known to have been an associate of St. Peter, it represents a record of the life of Jesus in the view of St. Peter.

My parents were traditional Catholics and most of my siblings carry the names of saints. You could do worse than having St. Mark for a patron.
Posted by Mr. D at 8:15 PM

and the Coptics trace their apostolic lineage directly through mark, as well.