Hi everyone. Benster was unavailable tonight because he is at a Boy Scout Camporee at the ever-popular Fred C. Andersen Scout Camp in Houlton, Wisconsin. For those of you who are wondering who Fred C. Andersen is, he used to run a paint store or something. So Fearless Maria has graciously decided to pick the games instead of the Benster. Say hello to your adoring public, Fearless Maria....

And Ben will be unavailable a few weeks from now because he will be attending the Camporee at Sherwin-Williams Scout Camp in Nowheresville, U.S.A. No, just kidding! Hi everyone! I suppose this is a different audience and for those of you who don't know me, well, you should know me. I don't bother with the hype. I don't need hype, at least not Benster-style HYYYYYYYYPPPPPE! Besides, whenever he talks about the hype, it always makes me think of one of those flashy news stations from the 80s. Action News! Now with Gusto! And Jazz Hands! And Paul Douglas with the weather.

Ah, the Goof on the Roof, as he was known in Chicago. Coincidentally, Paul Douglas was a Boy Scout, too.

Oh, I can totally see that. "Be prepared! Get under your kerchiefs everybody! It's gonna rain soon!" He was born to do the weather, I think.

All true. So should we pick some games, or pick on Paul Douglas some more?

Paul Douglas never did anything to us. Let's be good citizens and pick the games.

Northwestern Wildcats (-3.5) vs. Minnesota Golden Gophers. Okay, Fearless Maria, here's the story on this one. The Gophers were off to a good start, then they lost to Iowa and then they had a week off. Northwestern has had a good start and they lost to Penn State. So this game actually means something to someone other than the parents of the teams. The Gophers are going to go with backup quarterback Max Shortell, while Northwestern sometimes plays two quarterbacks at once. Confused? I am, too, but it seems to work for them. I'm going to go with the home team this time. Gophers 31, Northwestern 24.

Two quarterbacks at once? That seems a little weird. It's like putting two salt shakers on the table and not bothering with any pepper. I'm going to think that the Gophers are going to win, too, because Jerry "The Cable Guy" Kill seems to have been picking up the pace this year, as far as I can tell. So I think the Gophers will "git 'er done." Gophers 42, Northwestern 31.

You're off to a good start, Maria! A real natural!

Sure.... You expect me to believe that, Dad?

Why not? Positive thinking and all.

And the best part? Annie looks a little like Max Shortell! 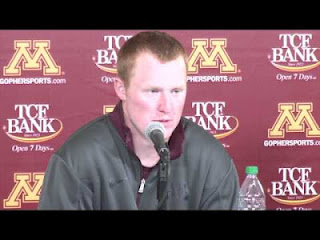 I heard he played Annie in a production of the play at his high school in Kansas, actually.

No he didn't, Dad! Stop making stuff up and get to the next game, please!

Beloved Wisconsin Badgers (pick) vs. Purdue Boilermakers. This game actually matters, too, since the winner of the game will likely have a chance to get to the Big Ten championship game, since Ohio State and Penn State are both ineligible. The Badgers have been a pretty dicey proposition this year, but I've seen some improvement in recent weeks and they should have a chance against the Boilermakers, who are having trouble deciding which quarterback to use, either Caleb TerBush or Robert Marve. If you have two quarterbacks, you really don't have any. Wisconsin 27, Purdue 19.

Wait a minute. Didn't you say that Northwestern plays two quarterbacks at the same time? So they don't really have any quarterbacks, either? Or they have too many? Make up your mind, Dad! As for the game, Boilermakers? Really? What's their mascot, the Little Engine That Could? Are they sponsored by Dolly Parton? Well, as much I don't want to upset the my father and brother, the Badgers have seemed a bit inconsistent this year. I guess I don't know about Purdue, but I suppose they've been chugging along. Purdue 35, Wisconsin 26.

Cool -- does that mean it's time to pick the Bears and make fun of Gino?

Unfortunately, the Bears are on bye this week and aren't playing.

Can I make fun of Gino, anyway? We want to keep practicing our favorite sport!

The Bears are on bye? Does that mean their chances of winning the Super Bowl have gone bye-bye? I'm just kidding, I do know what a bye means. And Gino, we may seem like rotten pals for always picking on your Bears, but don't worry -- we're just being weird. It's one of our favorite hobbies. Dad, could you get the Vikings game up?

Minnesota Vikings (no line) vs. Washington Redskins. There's no line on the game because it's still not clear whether Redskins QB Robert Griffin III can play. Griffin was injured last week and he may not be available. If he can't go, the Redskins go with Kirk Cousins, who was the quarterback at Michigan State last season and has nothing to do with the chain of sandwich shops. If Cousins can't play, perhaps they'll go with Jimmy John or Jersey Mike. Either way, I expect the Vikings to get their lunch handed to them. Redskins 24, Vikings 21.

Now I need the readers to understand something. Unlike the Benster, I'm a Vikings fan, although I also cheer for the Packers, too. Everybody may think that rooting for two teams is sad, but let me ask you this, punks -- do you call the vast land that is Switzerland sad? They could make you come to their country and they could freeze you in a block of ice in the Alps. Then you wouldn't be calling their neutrality sad! So, ha! And I am not the one to use a blow dryer to get you out of that ice block! And it's better to let you hair dry naturally, anyway! For the record, I am not really sure who's going to win this game, but at the same time I don't want to say it's a tie because that would be highly unlikely. Almost as unlikely as some of the boys in the Highview Middle School band remembering how to tie a tie properly! I guess I'll just pick the Vikings for fun. And Jared Allen needs a haircut, by the way. Vikings 29, Redskins 19.

Glorious Green Bay Packers (+3.5) vs. Houston Texans. The Packers need help -- things haven't been going well lately for them. Now they have to play what might be the best team in the league. The Texans are undefeated and feature a whole mess of former Badger greats on their team, including the dominant J. J. Watt, who might be the best defensive lineman in the league. Will the Packers right the ship in what will be a very hostile environment? Sure, why not? Packers 27, Houston 23.

I have also have faith in the Packers and my Auntie Carol posts a "Go Pack Go" on Facebook pretty much every weekend, and I think that they will take that into account. Trust me on this one, kids -- you don't want to make Auntie Carol mad at you! It's like poking a sleeping bear, or Bears. But it doesn't have anything to do with Gino! Packers 20, Houston 16.

There you go. Do you think anyone even missed the Benster?

Well, I do, Dad! And I'm sure that people miss having the hype, especially those people who are big fans of 100-0 predictions! Not my style -- that's what happens when you did way too many ball park estimates in 3rd and 4th grade math! And I'm pretty good at math, unfortunately.

Why yes. Yes you are. Should we leave them with a song, Maria?

What song should we leave them with, Dad?

How about one for Gino?

hey, the Chameleons DO have other songs you know...

its looking to me, that after this weekend, the Bears will sit alone in first place...

to Maria: bang up job here. keep it going...

hey, the Chameleons DO have other songs you know

That's true. We'll do a little exploring on that topic.

to Maria: bang up job here. keep it going

Maria says thank you! And I agree!

Fearless Maria is a Vikings fan?!?

You have some 'splainin to do!

Fearless Maria is a Vikings fan?!?

You have some 'splainin to do!

Well, we do live in Minnesota. And we believe in free will. But I take your point. For what it's worth, Benster is enough of a Packer fan to make up for an entire family.

And the Packers win! They certainly aren't a dominating team, but I don't know if anyone is this year. Wide open.