Part of the problem with maintaining a narrative is that you need to have people keep believing it, even when the narrative runs up against the rocks.

Republicans are often portrayed as stupid in media, so much so that many disgruntled conservatives internalize the message and call Republicans the "stupid party." The exemplar of stupidity in the cartoon world is Elmer Fudd: 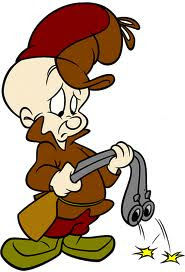 So it was strange for David Axelrod to mention a different Elmer in yesterday's talk show festival. Ann Althouse noticed:

On "Face the Nation," talking about last week's debate. Bob Schieffer was all: "What did you just say?" And Axelrod repeats: "Gantry-esque." Schieffer seeks to clarify: "Elmer as in Elmer Gantry the fictional evangelist?" And Axelrod goes: "Elmer Gantry. Yes. Yes. Yes. Thanks for clarifying."

What madness! What dream world is Axelrod living in? "Elmer Gantry" is a novel from 1927. It was made into a film in 1960 — half a century ago. I'm 61 years old and the movie pre-dates my movie-going days. Normal Americans are supposed to be conversant with this character?

Perhaps they are, but I'd personally find it a little surprising. I've not seen the movie, but it starred Burt Lancaster, who was a handsome devil back in the day: 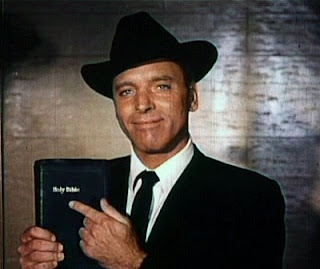 Can a Republican be Elmer Fudd and Elmer Gantry simultaneously? That would be a pretty good trick, even for someone as fiendishly clever/stupid as Mitt Romney.

No wonder they call what Axelrod does "spinning."