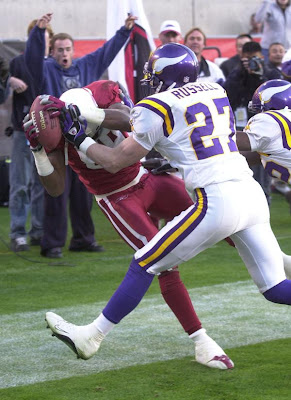 BIG GAME TOMORROW! FLORIDA AND ALABAMA! CAN YOU FEEL THE HYYYYYYYPE!!!!

Ow. My ears. Why are you screaming so loud, Seabiscuit? Or are you part of the hype machine?

Winner goes to Pasadena for the Title Game, Decrepit! That's a big deal, huh? Huh? Is this mike on?

Sorry, I turned it down a bit on you. So I'm guessing you'll be offering your views on this one, young fella?

Well, yes, but first we have other business. Like this:

Beloved Wisconsin Badgers (-12) vs. Hawaii Rainbow Brites. Did I really just call them the Rainbow Brites? Man, that's cold. Anyway, Wisconsin would be a 9-win team if they win this final game and it should be pretty easy. Hawaii is a .500 team this year in a generally poor conference, so it's not as if they've won a quality game this time around. And it won't start now. Badgers 50, Rainbow Brites 0.

Bucky was actually pretty smart in scheduling Hawaii this year. The last time they played out there in Paradise, Colt Brennan was not a factor. Now he's gone entirely. I was pretty disappointed with how the Badgers failed to respond against a decent but hardly outstanding Northwestern team. I suspect their best performances are a year away. But they'll certainly have enough to beat the depleted Rainbows. Wisconsin 31, Hawaii 20.

Nebraska Cornhuskers (+14 1/2) vs. The Eyes of Texas Are Upon You. The game will be played in Arlington, Texas, at the new Cowboys stadium. It's very expensive to get into that place. I'll admit that Nebraska is a good team, especially to have made it to the Big XII title game, but Texas should win. If they don't win, then watch for either TCU or Boise State to have a chance to play for the BCS Championship. We're Texas (And You're Not) 42, Nebraska 21.

I don't have a really good feel for this game. I only saw about 20 minutes of one Nebraska game this year and my sense is that the Big XII is down a little. The Longhorns are deep and talented, but I don't think they really belong in the BCS title game. They will be, though. And a big performance for Colt McCoy will cinch his Heisman. Texas 34, Nebraska 17.

Alabama Crimson Tide (+5 1/2) vs. Tim Tebow Nation and the rest of the Florida Gators. Seems like an even game, right? You thought wrong! I'm trying not to scream and SET LOOSE THE HYPE MACHINE. Deep breaths, Benster. Just chill. Okay, I'm better now. I regard that it is going to be a tough game for Alabama. Mark Ingram, the standout Alabama tailback/Heisman hopeful, suffered a hip pointer last week against Aw-barn. I think he'll play but not a lot and not effectively. Florida is going to the BCS game and Tim Tebow will get his second Heisman. As usual, you are wrong to doubt the POWER OF TEBOW! TEBOW! TEBOW! So I must inform you that you are mistaken, Decrepit. Gators 60, Bama 50.

Uh, Benster? No. I think the Hype Machine has filled you with laughing gas or something. I'll have to have a word with the Hype Machine later. Anyway, back to the game. I saw a good chunk of the Alabama/Auburn game. While I understand that Alabama played better in other games this season, I wasn't impressed with them at all. Auburn is an ordinary team and Alabama scarcely looked better. In fact, the Tide reminded me of Iowa a little bit. No one thinks Iowa is a national championship team. The Gators? Just maybe. Florida 23, Alabama 16.

Minnesota Vikings (-3 1/2) vs. Arizona House of Cards. Hey Vikings fans! Do you remember what happened the last time you were in Arizona? Click on this for the soundtrack! Sorry Mom, I just had to do that. By the way, Mom just told me I'm going to eat leftover liver and onions for posting that link. Anyway, back to this year. Minnesota should win, unless they put Benny Sapp on Larry Fitzgerald. I can just imagine the words coming out of Paul Allen's mouth again. Norsemen 39, Matt Leinart Nation 17.

I don't know about you, but I never get tired of that link, Benster. Heh. Anyway, this year it's different. The Cardinals are a much better team, but so are the Vikings. And while I suspect this will be a fun game, I think the Vikings will be better than the somewhat enigmatic Cardinals. Vikings 34, Cardinals 23.

St. Louis Sheep (+9) vs. Bear Down Chicago da Bearz. Da Bearz are wounded. They do however get a team that's just as good as a camera without batteries. In other words, the Sheep don't get the picture. Da Bearz 90, Sheep 7.

I may have to check the sports page. I'm not sure Da Bearz have scored 90 points in total all season. Okay, they've scored 216. So let's put it this way. They aren't likely to score 90. But they are likely to win against a truly awful Rams team. Jay Cutler gets a feel good game. Da Bearz 27, Rams 13.

Baltimore Ravens (+3) vs. Glorious Green Bay Packers. Green Bay has been playing much better since the awful episode with the Creamsicles a few weeks back. This game, however, will not be easy. The Ravens have a talented young offense and I can't get out of my mind a vision of Ray Lewis throwing Alan "Swinging Gate" Barbre aside like a sack of potato chips and getting into Aaron Rodgers' grill. Still, I think Green Bay will win. Packers 37, Edgar Allan Poe 30.

It occurs to me that we're going to agree on everything this week, Grasshopper. Well, the good news for the Packers is that "Swinging Gate" Barbre probably won't see much of the field this time around. The Raven defense is still fierce but they can be had. And very quietly the Packers have become the #1 defense in the National Football League this season. I think this one will be tight but the Pack will win, too. Packers 20, Ravens 17.

Dad, YOU CAN'T RESIST THE POWER OF THE HYPE MACHINE!!!!!! TEBOW! TEBOW! TEBOW! FEEL THE SPIRIT OF LEE CORSO! PUT ON THE GATOR HAT! YOU KNOW YOU WANT TO, DECREPIT! LIVE IT! BE IT! DANCE FOR ME, GREEK! I THINK I'M DONE! BEN OUT!

This much is certain -- no Mountain Dew for you, Sparky.
Posted by Benster at 7:20 PM