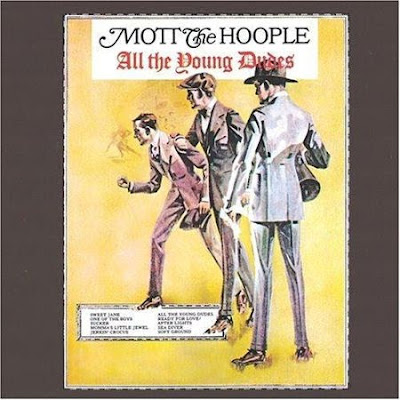 Well, lookee here. Benster is in the house for Guilty Pleasures!

That much is clear, Seabiscuit. So what kinda music do you want to feature here this evening?

Well, how about you pick one, then I pick one and we'll see where that takes us?

Okay. Sounds good. Even though we are right up against the holidays, I think we'll avoid holiday music, since we've already done that and frankly, I get a little sick of it after a while. So let me see. One thing I like to do is to pick songs on my Facebook account in honor of someone's birthday. As it happens, today is the birthday of Luther Grosvenor, who played under the name "Ariel Bender" in the British band Mott the Hoople. And Mott the Hoople was a very good band indeed. In fact, young dude, I would like to commend to your attention this little ditty:

All the Young Dudes

So what is your take on that one, young dude?

Okay. Unlike some other British singers, when you hear this guy (Ian Hunter) sing you can tell he's very British. And I was trying to get his haircut until you forced me to go to the barber shop the other day. Trying to keep the young dudes down, aren't you?

Wait a minute. Isn't that my line?

Not this time, refugee from the 70s! And I'm glad that I'm growing up in the 21st Century, when they actually know a thing or two about fashion! Whoo, that's cold!

Accurate, too. So what song do you want to pick, young fella?

Well, since life's been good to me so far, let's find old Joe Walsh and let him tell you about it!

Well, what do you think of that one, old dude?

I've never been sure what to think of this song, Benster. It's a pretty famous number and you'll hear it probably every half hour or so on some classic rock radio station in the country, but I could never tell if he was making fun of himself or making fun of his fans. 30 years later, I'm still not sure. But that gives me an idea for another song. You mentioned the word life.

I have no idea what brought that on. Anyway, here's a song about life, from only a year later, but very different. The name of this band is Talking Heads, playing here on the Old Grey Whistle Test in London in 1979:

In the immortal words of Bugs Bunny, what a maroon! What a Ta-Ra-Ra-Boom-De-Ay! I know stuff about life during wartime. It's not pretty and I want to see what happens if they lived through wartime. They sure wouldn't be singing about discos! I bet they'd sing a very different tune if they had to face a Panzer division!

Good point. Can't argue with that, Seabiscuit. So what else do you have for me?

Well, as you might know, one of my favorite movies of all time is Miracle. And the song they play over the closing credits at the end is one of my favorite songs. It's by Aerosmith and it's about time that you dream until your dreams come true, old dude!

Now that's some music, Decrepit. And I'll bet you even remember it when you weren't so decrepit, back when you were cool.

There are a lot of my old friends who read this feature, Benster, and they might argue that I've never been cool, but we'll leave that aside. That's another classic rock fave, so I think you're doing a fine job in replacing Fearless Maria this week, although she did pop over and offer that Steven Tyler is wearing some really weird clothes in that video.

That's her thing. Unlike Maria, I'm not exactly a good fashion expert, except on football uniforms. And I really hate these uniforms.

Hard to argue that, Benster. Anyway, you said the word uniform. So that means I have to break out this one from the Gang of Four, circa 1982 or thereabouts:

I Love a Man in Uniform

This song is wrong on so many levels, old dude. And Maria tells me it's not even as bad as this one.

Well, hardly anything else is that bad, young fella. Maybe you need to pick a better song. Whaddya got?

Well, since you asked so nicely, I think it's time to change it up with David Bowie. Turn and face it, Decrepit!

So, I have a question, old dude. What's up with all the weird outfits that Bowie was sporting in that video? I like the song, but the outfits, uh, not so much, you wascally wabbit!

You're asking me to explain the 1970s? I'd have an easier time explaining the 1790s. But we have no video from then. In fact, thinking about it makes me a little crazy. But which crazy?

Did you just sneak in 3 songs? You're dethspicable! You know what -- that's just low. I'm not letting you get the last word, Decrepit! Here we go -- here's a song for you!

Old man, look at my life. I'm a lot like you were, all right. And now it's time for all those old men who read your blog to pick their favorite song of this group of ditties. Put your favorite in the comments section, dudes and dudettes. And in the immortal words of Porky Pig -- Th-th-th-that's all, folks! Ben out!
Posted by Mr. D at 8:36 PM

old man is my favorite. neil young always was good with vocals.

All the old songs, boog-a-loo songs...carry the news. LOT of classics here. Of course, "Dudes" was kind of an anthem for the gay rights folks, but it's a great tune; how interesting that it's in a post with Bowie's "Ch-Ch-Cha-Changes." "Dream On" was a regular part of my junior high school years and entertainment, and like Joe Walsh, I lost my license for a time in later years. As for "Life During Wartime" - keep that one handy. It's not talking about a conventional war with tanks and such, but an urban war, perhaps against an occupying army, with a breakdown in social and physical infrastructure. Bummer.

Actually, I had forgotten the Icehouse Crazy, Dan. But thanks for the reminder -- brings me right back.

Good points all, NW. Hadn't thought a lot about the gay rights aspect of "All the Young Dudes" much in recent years, mainly since Bowie's androgyny has been on the wane pretty much continuously since about 1975. I just like the Mott the Hoople a lot -- a very underrated band.

Changes by Yes I could go for. Bowie? Nope. I'll cast my vote for Aerosmith, though I hate to encourage the Benster's ageism. Maybe some arthritis in his hip will mellow his tone. ;)

Never liked Dream On much until I saw Miracle. The song is perfectly placed in the movie. I also vote for Seal's song Crazy. Benster, how come you did not include any Beatles songs?