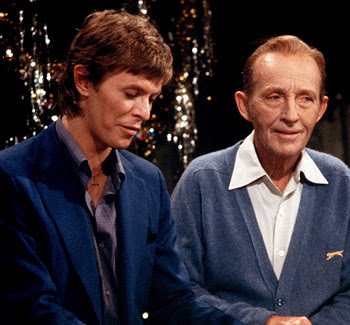 Wait, isn't that an Easter song?

No, Dad! You're thinking of Peter Cottontail! Get the cotton out of your ears and listen. That's Frosty the Snowman! Maybe you should go back to kindergarten and learn the words, because that's where I learned it!

When I was in kindergarten, I don't remember singing Christmas songs.

But I'll bet you spilled glitter all over your pants in art class. Bet that messed up your Garanimals pretty good, huh?

Actually, yes Maria. It did.

But Dad, you've got us off track. We're supposed to be doing Guilty Pleasures and I want to do some Christmas music!

That's a happy sound, Maria. Ella is a wonderful singer and that's one of my favorites.

Glad you like it, Dad. Say, if I pick good songs will you get me a Wii for Christmas?

Maybe. You're off to a good start so far.

Dad, I think we need to take a vacation. How about to the Holiday Inn?

What's at the Holiday Inn, Maria?

Well, according to guys in the 1940s and the attractive ladies who seem to be hanging around the grand piano, there's a good chance of a:

So who is that attractive lady who barely does anything, Dad?

Her name is Marjorie Reynolds. She was in that movie, but I'm not too up on the rest of her career.

It's Christmas, Dad. I'll give you a break on knowing that. But am I still in the running for the Wii?

Yep, if you keep picking winners, you're in good shape.

Well, Mom plays this one all the time.

And he was a merry old soul, right?

Benster just whispered a suggestion in my ear. How about this?

All I Want for Christmas Is My Two Front Teeth

Ben! Knock it off! I want that Wii! And so do you, Mister.

Maria, you don't want to be so hard on your brother, now do you?

I guess not, Dad. Ben wants a second chance. Try this one, Dad!

Grandma Got Run Over By a Reindeer

I'm not sure he's helping your cause, Maria.

After hearing it about 4000 times, maybe not so much. But that's not your fault. So what other songs do you know about?

Maybe I should play it safe and play some more Bing Crosby:

I remember watching that when I was a kid, Maria. That was from Bing Crosby's last Christmas special and David Bowie was the guest star. It's a somewhat odd pairing, but now, more than 30 years later it's not so weird any more.

So how's that Wii coming along?

Well, we'll have to see.

Maybe I'll have to try this one, Dad!

Do They Know It's Christmas

I remember that one well too, Maria. It was Christmas 1984 and there was a terrible famine going on in Africa. A lot of performers decided to make a benefit record and if look closely you'll see a lot of famous singers, like Bono of U2, Boy George, Phil Collins, George Michael and Sting.

Who are the girls? Is that Bananarama?

Yes. They had lots of people involved in it.

Doing something nice for people at Christmas is cool, Dad! You know that I went to Feed My Starving Children last week, right? So I was trying to help feed the world, too!

That was a great idea, Maria. And there are a lot of other great charities you can help right now.

That's a great idea, Dad! But I think I need at least another song or two to make sure I get that Wii. So maybe you'd like one of these?

Happy Christmas (War is Over)

So those are definitely the Christmas (Parentheses) Pair of songs, huh Dad?

Thanks, Dad. But now we need everyone else to make their choice. Send a letter to Santa Maria in the comments section!

i like the Little Drummer Boy, Maria.
always have, no matter who is singing it. so, it would have to be the top of my list.

You got me with the first one. Ella Fitzgerald's voice is just so beautiful. I did listen to the rest of them, though, to be fair. And I'd have to put White Christmas in second place based on a strong melody.