It's a Gas Gas Gas

The price of gasoline in the Twin Cities this weekend is $3.90/gallon. That's a tough price for a lot of people, including me. Other places it's even more.

Is there any relief forthcoming? Well, consider this anecdote, as related by Mark Steyn in a recent column: 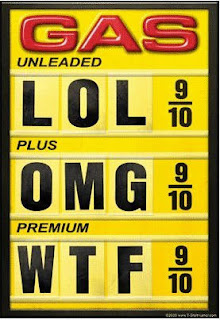 The other day, Barack Obama was in the oddly apt town of Fairless Hills, Pa., at what the White House billed as one of those ersatz “town hall” discussions into which republican government has degenerated. He was asked a question by a citizen of the United States. The cost of a gallon of gas has doubled on Obama’s watch, and this gentleman asked, “Is there a chance of the price being lowered again?”

As the Associated Press reported it, the president responded “laughingly”: “I know some of these big guys, they’re all still driving their big SUVs. You know, they got their big monster trucks and everything. . . . If you’re complaining about the price of gas and you’re only getting eight miles a gallon — (laughter) . . . ”

That’s how the official White House transcript reported it: Laughter. Big yuks. “So, like I said, if you’re getting eight miles a gallon you may want to think about a trade-in. You can get a great deal.”

To which Steyn replies:

America, 2011: A man gets driven in a motorcade to sneer at a man who has to drive himself to work. A guy who has never generated a dime of wealth, never had to make payroll, never worked at any job other than his own tireless self-promotion literally cannot comprehend that out there beyond the far fringes of the motorcade outriders are people who drive a long distance to jobs whose economic viability is greatly diminished when getting there costs twice as much as the buck-eighty-per-gallon it cost back at the dawn of the Hopeychangey Era.

To be fair, gas was only $1.80/gallon for a little while and it was going to go up. But the same conditions that led to the last price spike in 2008 are back with a vengeance this time. And Steyn's larger point is spot-on: the President of the United States doesn't give a damn about it.

So it's time to have another contest for the Mr. Dilettante's Neighborhood audience. My questions are these:

1) What will be peak price this year in the Twin Cities?
2) When will it happen?
3) What will be the price on Christmas Day?
4) Will President Obama open up more oil drilling to help alleviate the situation and send a message to the world market that the U.S. is no longer going to be a spectator?

Make your calls in the comment section.
Posted by Mr. D at 10:02 AM

it's to the point where i may save money if i quite working and take unemployment.

Gino, stop being so selfish. You need to work to pay for the government.

Obama, while our President, no longer has the respect of the majority of the populace. I would think the oil companies will do what the market dictates and ignore his ideological banter.