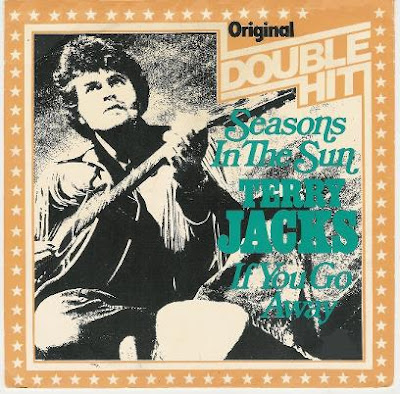 So the Nightwriter was waxing nostalgic the other day about 1974. And I was thinking about how bad a year it was. Then I remembered, I'd already written about this, almost two years ago now. So from deep in the archives, I exhume the following.

Sage advice from the former partner of Art Garfunkel, circa 1986, an excellent year in rock history. But that's not why you're here. A regular reader of this feature sent an e-mail referencing a recent CNN.com article about the worst song in history. Link is here:

While an instructive tour of the horror that is Bobby Goldsboro, it only references in passing what the author refers to as the "annus mirabilis" of 1974. And that, friends is the mother lode, the money shot, the greatest repository of dire that I know.

Do you remember? The President was reeling, gas prices were soaring and waves of pessimism were threatening to engulf the land. It even seems vaguely familiar today. But AM radio was not yet the province of Rush and his shout show acolytes, and stations like my old hometown favorite, WNAM, were spinning the top hits. And what a cavalcade it was. Just let the soundtrack play in your mind.

Seasons in the Sun
Billy, Don't Be a Hero
The Night Chicago Died
Having My Baby
Rock Me Gently
Life is a Rock (But the Radio Rolled Me)
My Girl Bill
Midnight at the Oasis
The Streak
Hooked on a Feeling (the "Ooga Shocka" Blue Swede version, not B. J. Thomas)

Are you wincing yet? It was a strange and wondrous time, when novelty artists like Jim Stafford and Ray Stevens, who are now safely confined in Branson, ruled the airwaves. It was a time when a Catholic nun (Sr. Janet Meade) could ride the charts with a bad, discofied version of the Lord's Prayer, followed immediately on the WNAM playlist with "Having My Baby" and, if you were lucky, the "Bertha Butt Boogie." I remember getting on the phone with my brothers to call the WNAM studios, pestering the d.j.'s to play Cheech & Chong's "Sister Mary Elephant," because, apparently, we weren't satisfied that the music they were playing was sufficiently strange.

It would be worth studying, I suppose, the convergence of forces that turned an entire summer over to an ocean of novelty tunes. And it is worth remembering that 1974 was also the year of Eric Clapton's comeback album, 461 Ocean Boulevard, and Dylan's masterwork Blood on the Tracks, among other things. Sometimes the Zeitgeist blows strangely. Sometimes, it just blows.

I'm not sure who wrote the song, but "I've been to Paridise, But I've Never Been to Me" has to be one of the worst. Another is "Torn Between to Lovers"

Both fine choices, anonymous, as examples of dreck. This is a nearly inexhaustible topic; as long as foolish people have access to recording equipment, we will have more and more contenders. I think another related topic worth pursuing is the "so bad they're great" songs. Stay tuned....

What about "Convoy?" I just heard that song for possibly the first time recently. That was horrible.

I see that the comments of this editor's blog are very accurate, not to mention the challenging vocabulary. Does Marnie Centon, Dianne Paltzer or Denny O get the credit?

It appears that one of your bloggers, who shall remain "anonymous" can't figure out the difference between "2" and "to" or "too".

Yep, "Convoy" was amazingly bad. It has to be heard to be believed.

Never took a class with Diane Paltzer. If you want to blame somebody, it has to be the redoubtable Sr. Renita, the frightening nun from Central Casting. 25 years on, I can honestly say she changed my life more than any other teacher I had. But I'm still a little scared of her.

I think 1974 was an ugly year and a transition year for the culture in general, and this was reflected in the music.

The Viet Nam war was ongoing but in a death spiral with the public, we were having major convulsions in our gas supply and pricing (I know, I was pumping a lot of that gas for $2.25 an hour), I believe Nixon's wage and price freeze was that year, and the U.S. auto industry made some of its worst cars ever in terms of style, performance and reliability as it was just beginning to realize that Japan was kicking its butt and eating its lunch. At least disco hadn't emerged yet!

The music reflected our cultural angst and whiny lack of self-confidence - suggesting why "The Way We Were" and "Seasons in the Sun" were the #1 and #2 songs of the year.

It was a time where people clung to safe (John Denver and Olivia Newton-John had multiple hits that year), while some urban grittiness was also emerging (Stevie Wonder's "Living for the City"). You had Donnie & Marie on the charts the same time as Todd Rundgren, movie themes were popular and nearly as schizo (the afore-mentioned TWWW, The Entertainer, Love's Theme from Love Story...and Tubulur Bells). We also had a big hit from a band that only sang English phonetically (Waterloo by Abba) and a hit by Barry White, Never Gonna Give You Up. Actually, my theory is that all of Barry White's "songs" were just one long song simply extruded and tied off every four minutes like link bologna. And if all that wasn't weird enough for you, how about these lyrics: "Some people call me the space cowboy, some people call me the gangster of love; some people call me Maurice, 'cause I speak of the pompitous of love." (I wonder if anyone's launched a blog called Pompitous of Love yet?).

On a positive note, Eric Clapton brought reggae mainstream with I Shot the Sheriff.

Geez, I should get my own blog.

I think your analysis is pretty much spot-on, NW. Angst-filled, whiny and somewhat schizo is how I remember it, although at the time I wasn't quite old enough to fully understand some of it (I was 10 in 1974). And where the expression was probably most forthright was on the R&B side of things - IIRC, 1974 was the year that the O'Jays came out with "For The Love of Money," which was just redolent with paranoia.

You forgot "Kung Fu Fighting". My friends and I spent about a month kicking the snot out of each other on the playground after that one came out.

Sorry about the omission SA, but truth be told, I've been trying to forget all of those songs for years.

"The Night Chicago Died" by Paper Lace--A staple at local sports stadiums when the windy city teams come to play.

Of course, there was "Life is a Rock (but the Radio Rolled me)" (Reunion) "Alone Again, Naturally" and "Claire" (Gilbert O' Sullivan), "Emma" by Hot Chocolate.

Paul McCartney did "Jet" and "Helen Wheels" and "Junior's Farm."

But "Lady" by Styx wasn't too bad.