Where do you slot W? 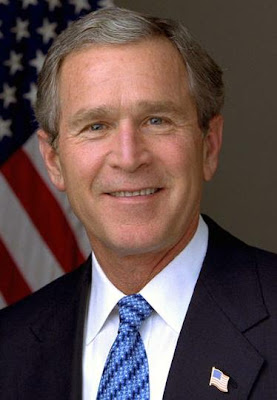 Like most conservatives, I've been disappointed in certain aspects of George W. Bush's presidency. The thing that continues to amaze me is that so many people on the Left routinely denounce Bush and refer to him as the worst president in the history of the nation. (No, you sure don't have to click on all those links. Although some of these folks would probably appreciate the traffic.)

Given that in my lifetime we've had people like Lyndon Johnson, Richard Nixon, Jimmy Carter and Bill Clinton occupy the Oval Office, it seems simply inconceivable to me that anyone could view Bush as worse than all of these guys. But apparently some people do.

So I'm throwing the following questions out to the Mr. Dilettante audience:

1) Is Bush the worst president in American history? If so, why?

3) What do you view as Bush's greatest accomplishment?

4) What do you view as Bush's greatest failing?

5) 50 years on, how will Bush be viewed? Will he still rank low, or will his reputation rise like this guy?
The floor is open. And I will answer my own questions in a subsequent post.
Posted by Mr. D at 9:15 PM

we can rate them based upon a mix of factors. i'll leave the idealogy factor out of it,though.

carter was the worst. hands down. his economic policy was a failure. a total failure.
energy policy. absolute failure.

he didn't have the respect of a congress controlled by his party.

he wasnt respected by the people.

he was a laughingstock on the world stage. everybody's favorite stage.

he DID broker the camp david accords, but that wasnt all that hard to do. egypt, and you can ask any egyptian, was tired of paying the price for a series of wars of which they had no benefit if they had won. these wars were fought in the spirit of arab brotherhood, and for no other real reason.
but, in exchange for a peace egypt wanted anyway, the USA is required to pay egypt 'X' amount of $$ for ever.

but, he gave us Ronald Reagan. so,i'll give him credit for paving that road.

1. Bush is far from the worst president ever. A lot of people don't think of it this way right now, but 9/11 was potentially disastrous for this country, beyond the lives that were lost that day. There was the perception that we would not stand up for ourselves. At the cost of popularity and all his political capital, Bush took action that proved that perception wrong. By itself, that show of spine is worth more than we can quantify.

4. His greatest failing, like Reagan's, was failing to control spending. Heck, he didn't even try.

4. Not getting social security reform passed; buying into the global warming kool-aid.

5. I believe he will be looked upon favorabley as the man who rightfully took on the Islamic bastards before they finally took us out in 2012 after four years of Hillbama.

1. Hard to say. He has certainly set a new standard for the Presidency, combining the incompetence of Harding, the arrogance of Jackson and the ambition of Wilson, though I suspect Wilson read about 154,438 more books in his life than W ever managed.

2. I expect Harding was worse. I'll give him this though; he had no illusions about himself. He knew he was a hack from Ohio, and never set out to do anything but pilfer. This as opposed to a guy from Maine who went to Harvard and Yale but is proud of being anti-intellectual and unable to speak coherently, went A.W.O.L. on the National Guard service his daddy obtained for him, never had any success in life that was not a direct product of his family connections and wealth, has never exhibited the slightest interest or effort in understanding the world, or any ambition until he got sober at 40 and then decided he should be President, has been repeatedly wrong and/or deceptive about the circumstances he has cited in support of the most grave decision that a president can make, but has apparently successfully convinced himself, and, as it now stands, about 32% of the American people, that he is a brave heroic Texas rancher/visionary. I would urge any conservative who would choose to regard himself as intellectually honest to describe how they would feel about a President who got us into this catastrophic disaster in Iraq with the repeated and shifting false justifications that have been presented to us if that president would have happened to have been named Bill Clinton. I guess what I am saying is that perhaps it is not enough for a President to be willing to take action; it would also be helpful if either he, or the decision making process that is established under his watch, is reasoned, informed and intent on deciding a wise course of action.

3. Success? I expect he's greatly improved his cardio vascular health over the last 7 years. I can't think of anything else that has improved in this country over that time period.

4. Iraq (I guess I'm just a guy who gets to bogged down in details, but it strikes me as a little strange to divert resources away from military action against the people who perpetrated 9/11 because you ignored U.S. intelligence estimates and falsely claimed to the world that Iraq was an imminent threat that possessed weapons of mass destruction and followed the advice of those who had been urging an attack against Iraq since the 1990's and saw 9/11 as a golden opportunity to act upon their theories by confusing and or lying to the American people and the world, leading us into what now appears to be a never ending drain of American lives, billion of dollars and the loss of American prestige in the world). Katrina. Harriet Meyers. Massive deficits. The rise of China. They'll welcome us as liberators. Bring it on. Mission Accomplished. Warrantless eavesdropping. The Geneva Convention is quaint. An economy in shambles. Halliburton. Private security forces engaging in torture. We have been witnessing a startling, steady, distressing and constant degradation of our Constitution, of our position as being the force for justice and decency, and of the expectation that the United States of America knows what it is doing and tells the truth to its citizens and to the rest of the world. He is a disgrace to the best that this country has offered the world. Other than that, everything's peachy, and he's right up there with Washington, Lincoln and Roosevelt.