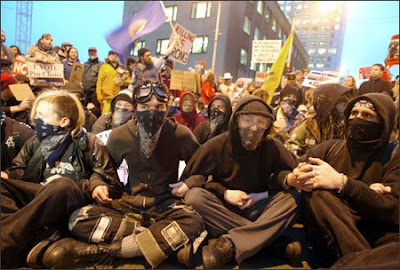 My younger brother (a/k/a the Stinger) recently started blogging. He's a very smart guy and he has an interesting take on things. In a recent post he was talking about the controversy surrounding temporarily changing the bar closing time in St. Paul during the upcoming Republican Convention. This has been a bone of contention in St. Paul and has led to some, er, uncharitable comments about our future guests. Stinger asked an interesting question:

Are Republicans big partiers? Are people like James Dobson, Gary Bauer, Pat Robertson, and the like going to be kicking it at Billy's on Grand until 4 AM? I guess we just might see.

Personally, I don't expect to see any of these gentlemen out carousing. I'm not even sure that they will be in St. Paul. Dobson is lukewarm at best about McCain. Leave that aside, though, because Stinger concludes with something else that's far more important.

Actually, the really interesting thing to potentially see will be if drunk GOPers and drunk lefty protesters will have any drunken brawls at 4:30 in the morning....

And there it is, hiding in plain sight. The actual reason to oppose the late closing time. It's not besotted GOP operatives that could pose problems. While there will be ample opportunities for Republican-style fun at the convention, these folks will be coming to St. Paul to work.

But what of the trust fund anarchists? If reports are true, thousands of what P. J. O'Rourke called the "Perennially Indignant" will be descending on our fair city. And here's the dirty little secret about these people -- they have money, in some cases boatloads of money. Truly poor people don't have the disposable income to travel to places like St. Paul, Minnesota. The ideologically-addled spawn of the idle rich? They have money. These are the patchouli-drenched, self-congratulatory hordes that will be coming to town.

And once they get here, they are going to be frustrated. They may get to have a few marches, but they won't have any real effect on what goes on at the X. St. Paul's finest will see to that. But they will be running loose on the streets of St. Paul, in the neighborhoods, the parks and elsewhere. And as a general rule, it's never a good idea for frustrated people to be out drinking, especially frustrated people who take a dim view of social niceties.

Dave Thune may profess to be concerned about drunken Republicans vomiting on his property. But whether he wants to say it or not, he knows that any technicolor yawns that mar his impatiens will be coming from the port side.

I guess I understand the concerns about drunken republicans. Look at how much trouble a sober republican caused in a bathroom at the airport....

Wow, you showed us!

Look how much trouble allegedly sober Democrats cause at all levels of government when they are on the job...

I'm sure those bars are going to admit only those with RNC credentials into their establishments. And, of course, the Democrats in town enjoying the hospitality of Saint Paul while they protest the convention will proceed to their hotels in an orderly fashion and make sure they take a badly needed shower and catch up on their beauty rest after the convention is done for the day.

Mark,
The first Anon wasn't me, and I am not sure how they know if Senator Craig was drinking on the night in question. They might have some explaining to do. But honestly, someone should meet Larry Craig at the concourse gate and walk him to his limo. It's a staged event and you don't want any gaffes.
BTW, when did all liberals become hygienically challenged? Wow, "patchouli-drenched, self-congratulatory hordes"..."who take a dim view of social niceties." Sounds like a Grateful Dead show to me. When did you start borrowing memes from Ann Coulter?
Regards,
Rich

I think your referring to my blog for a post is indicative of the "blind squirrel" theory. Thanks for the nod there, Mark. It is appreciated!

As for my post on Stinger Nation, a lot of that was tongue-in-cheek, which I am sure you know. There is a lot of that going on in the Nation. Honestly, I think there may be some attempts to instigate things, but I doubt the belief that it will necessarily be fueled by alcohol.

As for a fear of frustrated people going out, I gotta say, that is unfair. I am perpetually frustrated, but I am mostly harmless when I go out.

I don't expect to see you there in September. You work for a living. As do 99.9% of liberals. While I don't know for sure, my recollection is that your standards of hygiene were impeccable and I have no reason to be believe that any of that has changed.

I think you know the distinction I'm making. The people who will be in St. Paul aren't even necessarily liberals. Remember, I said "trust fund anarchists." That ain't you, and that ain't me.

As for Craig, I called for his resignation at the time (you can look it up) and nothing has happened to change my opinion of the matter.

And sorry if I seem cranky - I had oral surgery this afternoon....