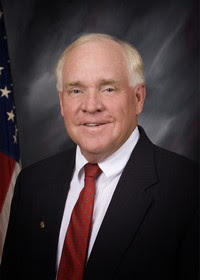 So they had a "town meeting" on Saturday morning at the Family Service Center in New Brighton. It's an election year of course and at any such gathering, you'd fully expect politicians to be there. And sure enough, several were. Kate Knuth and Satveer Chaudhary, our state rep and state senator, were there. So was Ramsey County Commissioner Jan Parker. These folks, all of whom are Democrats, were welcome.

Another politician showed up as well -- Ed Matthews, the GOP candidate for the 4th CD, who is running against incumbent Betty McCollum. As it turned out, our municipal hospitality wasn't so, shall we say, bi-partisan. Force50 from Boots On picks up the story (read the whole thing!):

The Republican candidate for U.S. Representative for Minnesota’s 4th
District, Ed Matthews, came to meet people at the April 26th Town Hall meeting.
He had already met dozens of people including the City Manager with no problem.
But just before the program began, Mayor Larson shows up and stops Ed Matthews.
He told Matthews, “… this is tacky, you shouldn’t be doing this!”

There was no evidence that Matthews was disrupting the event in any way. The other politicos were free to do as they pleased -- in fact, as Force50 notes in his dispatch, Chaudhary was given an opportunity to address the audience.

Not to put too fine a point on it, but this is penny-ante stuff. Mayor Larson may not agree with Mr. Matthews or support his candidacy, but when the mayor of a city ham-handedly attempts to silence a political candidate while representing the city at a city event, it's embarrassing at best. Larson clearly owes Matthews an apology, but more than that he owes his constituents an apology. The citizens of our community deserve better.
Cross-posted at True North.
Posted by Mr. D at 8:37 PM

Mark,
coming in from the left, I am in total agreement with you. I thought ham-handed tactics like this were practically non-existent and very bad form in Minnesota.
Rich