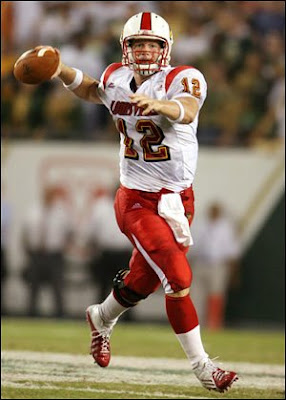 In today's Star Tribune, Judd Zulgad and Kevin Seifert had the Packers taking Louisville quarterback Brian Brohm in the first round. They were right - the Packers have drafted Brohm. But they did it in the second round. Not sure why the Packers took another wide receiver with their first of three second-round selections, but the guy they took, Jordy Nelson from Kansas State, was insanely productive last season, catching 122 passes. And they got a needed defensive back named Patrick Lee as well.

As we've seen in recent years, Green Bay G.M. Ted Thompson likes to stockpile guys. It's worked out pretty well. We'll know for sure about these guys in about 2011. And on a side note, I'm proud to report that my afternoon was essentially Kiper-free.
Posted by Mr. D at 8:09 PM

I had the NFL Channel on all day, watching throughout with my son during breaks from his 13th birthday party family celebration. I told him how the world has changed, explaining how when I was a kid, the draft was on a Tuesday, and there was no ESPN or NFL Network, and I would bring change and call the local radio station from a payphone at school during the day to find out who the Pack took, and then hope for a 30 second highlight on the sports segment on the 10:00 news. The Information Age does make it easier to be an obsessive fan.

Ted Thompson is always full of surprises, but I just tell myself his track record has been pretty good. My son and I have been studying the draft magazines for the last month, and didn't even look at wide receivers. I told him before that when you pick this low, there's a chance they'll pick somebody we haven't heard of before, or hadn't thought about, and old Ted Justin Harrell'ed us again. We were pretty nonplussed, but I told him I hadn't heard of Nick Barnett when we picked him. I just checked out the highlights on Nelson on the web, and he looks pretty good. He's big, 6'3, 217, fast enough, and throws a pretty good option pass, strangely enough. Driver and Jennings are top notch, and Jones has shown a lot of potential, but I guess they just had Nelson as the highest player on the board, figured Driver won't play forever, and may not be sold on Koren Robinson and Ruvell Martin. Nelson might be better than Jones. I did read one blog that suggested he could be another Bill Schroeder. That was uncalled for. I'm thinking he's more of the rich man's Barry Smith. I'm glad they got Brohm. It was a little unsettling to only have one NFL caliber quarterback on your roster, especially when he's not named Favre. Lee is like Nelson--fits the prototype of what the Pack has at that position. All in all, not a bad day. I was kind of hoping on the Domer TE Carlson, but Holmgren beat us to it. Hopefully we get a tight end tomorrow, and an OL prospect. I was glad to see the Lions pass on the Illinois RB. I don't need to see another hotshot rookie RB in the division after seeing #28 in the Purple last year.