The Buckos Reach For A Retread 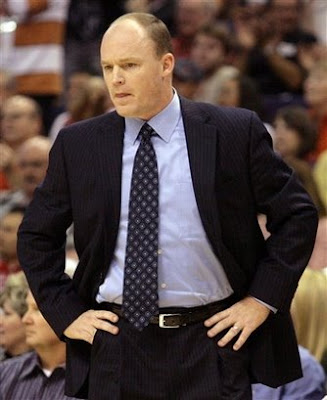 When it comes to coaching, the NBA is a strange league. It's funny how the same guys keep resurfacing over and over again. When the Bucks announed tonight that they were bringing in Scott Skiles, I had to roll my eyes. This is his third stop in the NBA and the other guy they were reportedly considering, Rick Carlisle, has had a similar career path. What, isn't Hubie Brown available? Or maybe Matt Guokas? Or Doug Collins? Surely the 30th time must be the charm for one of these dudes. And I understand that Isiah Thomas is available....

Skiles got run out of Chicago last season for reasons that seem to be a bit opaque. He walks into a tough situation with the Bucks - they have some talent but they also have a lot of bad contracts and not a lot of cap room. The best they can hope for, realistically, is finding someone to take some of the bad contracts away, or maybe to have the ping pong balls land in their favor yet again. This would be a good year to get a top pick, as there are some really fine collegians entering the league this year. The Woofies might even get a good player for a change this time. Naah, that never happens. They'll probably end up with Spencer Tollackson or someone like that.

When I was young I was a huge Bucks fan but it's been awfully tough to get with them in recent years. They were a fine team for most of the first 20 years of their existence, but they haven't been a factor for a long time, with only one appearance in the conference finals since then. Is Scott Skiles the guy to lead them out of the wilderness after lo these many years? Guess I'm a little bit skeptical. Stinger is a bit more sanguine about this hire than I am, although he wanted Carlisle - I trust Stinger's judgment about these things as he pays more attention to the Buckos than I do, but I'm hard-pressed to see how either of these guys would have made any difference.
Posted by Mr. D at 9:54 PM

I think Scott Skiles is a decent choice (like you said, I preferred Carlisle) for the Bucks specifically because he has NBA coaching experience. The Bucks went the other way three times in a row, and it got them nowhere. The players had no respect for Terry Porter, Terry Stotts, and Larry Krystowiak. True, not even Pat Riley circa 1987 could have done much with this Bucks team, but I guess I am seeing what could turn out to be good for the Bucks franchise in about two or three years, once they get rid of some of these bad contracts. The Bucks have to jettison a lot of mediocre-to-bad players, and it will take time to do. So yes, the Bucks will not be good. I liken it to the Brewers situation. You need a foundation before building a house. I see this as what the Bucks are doing.

Don't kid yourself about the Wolves, Mark. They will pick 5th like they always do. I think the Knicks, Nets, or Heat are due to get that #1 pick.