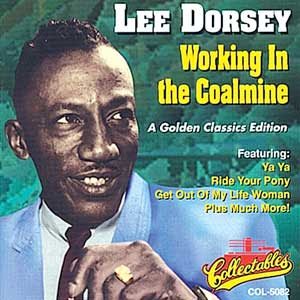 I was going to do a Guilty Pleasures this evening, but since it's a SCHOOL NIGHT (heh heh), Fearless Maria is hors de combat this evening. So let's do something a little different.

Labor Day usually means a few things: picnics, a nice day off and usually a series of lamentations in the MSM about the waning influence of organized labor. You could almost set your watch by it. This being Mr. Dilettante's Neighborhood, I'd rather talk about music.

My good friend and regular portside commenter Rich mentioned songs about working a few days back and made a number of excellent suggestions. I'm going to provide you links to a few of those songs, and a few others that Mrs. D and I thought of, for your Labor Day pleasure. You can either vote for your favorite, or suggest another one that you don't see here. My commentary will be pretty minimal, though -- most of these speak for themselves.

We Gotta Get Out of this Place -- The Animals, with a needless intro from Casey Kasem.

Career Opportunities -- The Clash, with some excellent hats.

Working for the Clampdown -- also The Clash, warning what happens when you start wearing blue and brown.

Smithers-Jones -- The Jam, a band that never quite made it here in America, even though they were just about as big as the Clash back in the U.K.

Working Day and Night -- Michael Jackson, one of many great tracks from Off the Wall.

Workin' in a Coalmine -- Lee Dorsey, the original.

Workin' in a Coalmine -- Devo, perhaps not an improvement, from the now largely forgotten variety show Fridays.

Industrial Disease -- Dire Straits, which contains one of my favorite lines in rock history: "two men say they're Jesus, one of them must be wrong."

Work With Me, Annie -- Hank Ballard and the Midnighters, from way back when. I don't think he's talking about his job. This song merited a response from Etta James: Roll With Me, Henry

Work to Do -- the Isley Brothers, a great one from their second commercial peak in the early 1970s.

One Piece at a Time -- Johnny Cash does a little method acting. Better than stealing office supplies.

Work Song -- Cannonball Adderley Sextet. The audio on this one is very low, but it's a nice, er, jazz workout and my high school pep band used to play this song before our home basketball games, so it's got some good memories.

When the Night Comes -- The Boomtown Rats. Bob Geldof's band was a pretty iffy proposition, but I liked these guys a lot in high school and this one still works for me.

And the best part -- we got through the whole shebang without referencing Johnny Paycheck. Oops.
Posted by Mr. D at 9:09 PM

That's not even a contest. Cannonball Adderley strolls across the finish line well in advance of anyone else. He's cool like that.

The first things that came to my mind was Todd Rundgren's (I Don't Wanna Work Just Wanna) Bang on the Drum All Day, and the Australian band, Men At Work. And where's Tennessee Ernie Ford and the classic "16 Tons"?

I'll have to peruse your offerings when I have access to a computer that isn't blocked from playing videos.

Tennessee Ernie Ford's 16 Tons is spot-on, NW. Should have thought of that one.

There's no better description for this theme than:

I was born one mornin' when the sun didn't shine
I picked up my shovel and I walked to the mine
I loaded sixteen tons of number nine coal
And the straw boss said "Well, a-bless my soul"

Here's a pretty rare one from a tiny gal that can really belt them out...