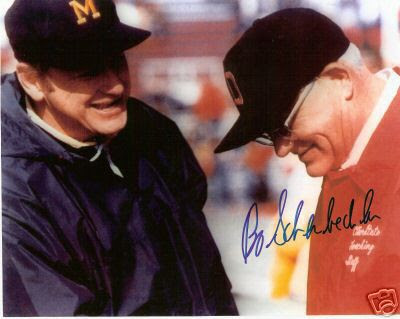 So who would that be, Seabiscuit?

Do you know what tomorrow is, Decrepit?

Saturday, I think. Oh, that's right, it's your birthday. So I take it that you're the jolly good fellow, Grasshopper?

Who else? Now, it's time to get down to bidness.

Minnesota Golden Brewsters (+10) vs. Herky the Hawkeye, No Longer Featuring Ricky Stanzi, My All-Time Favorite Hawkeye/Whipping Boy. Iowa is a wounded team. Without my whipping post Stanzi, they have not won a game. The Brew Crew is coming off a win in which they became bowl eligible by defeating Lakeland Dental Academy, er, I mean South Dakota State. I'm calling the upset! Brewsters 38, Iowa Minus Stanzi Equals 17.

Based on that math, I may have to hire you a tutor. The Gophers really ought to hang their heads in shame over the way this season has gone, but it's become quite evident that Tim Brewster is shameless. Iowa could still get a nice bowl if they win, especially if they win impressively. Last time Iowa edged the Gophers 55-0. It will be a little closer this time. Iowa 24, Punky Brewster 7.

Beloved Wisconsin Badgers (-7) vs. Northwestern Wildcat Offense. Wisconsin is 8-2 and they have only lost to Iowa and Ohio State. The Cats did beat those Hawkeyes in Iowa City, but I think Bucky is too tough. Bucky Badger 60, Northwestern 10.

Uh, no. The Badgers are the better team and should win, but it won't be easy. The Wildcats have historically played the Badgers pretty tough in lovely Evanston, but I think this year they're balanced enough to wear the Wildcats down. Wisconsin 27, Northwestern 17.

The Ohio State University Buckeyes (-12) vs. Meeshegan Hail to the Vanquished. Since this is the only good national game, why not pick it? In Ann Arbor, there are probably some cries for Coach Rich Rodriguez's head. And I don't have much confidence in young quarterback Tate Forcier, who puts the the force in Forcier. But there is one way that Meeshegan could win; if Terrelle Pryor tries to win the game by himself. But Jim Tressel won't let that happen. Ohio State 49, Meeshegan 7.

Somewhere in the big press box in the sky, Bo Schembechler has to be shaking his head over what has happened to his beloved Wolverines. He's also shaking his head over your pick. The problem is, I suspect you're right and that the Go Bluers are just going to have to live with it. It won't be 49-7, but it could be ugly. How ugly? This ugly. Ohio State 31, Michigan 10.

Seattle Seabags (+10 1/2) vs. Minnesota Vikings. Matt Hasselbeck reminds me of a tragic hero. He has talent but he always seems to get hurt. Therefore Seattle has to start Seneca Wallace, who should still be a wide receiver. Minnesota should handle Seattle and the Seabags will be flies on the Vikings' flanks. Vikings 34, Seabags 13.

I don't think Seattle will win. I wonder if the Vikings will be complacent, though. They've had a lot of people telling them how good they are lately and if they are going to stumble down the stretch, this is the sort of game where it could happen. The guess here is that they won't, though. Vikings 35, Seattle 21.

San Francisco Singletarys (+6 1/2) vs. Glorious Green Bay Packers. I have a message for those Aaron Rodgers haters. He doesn't suck. In fact, Green Bay's season looks a lot different than it did last week. The Niners will be a challenge but one that Green Bay can handle. Packers 24, San Fran 17.

You may be on to something, young fella. I think defense will carry the day here. The 49ers are offensively challenged and the Packer defense played beautifully last week against a very good Dallas team. I suspect that the Packers will do enough to win, but it could be a bit unsightly. Packers 27, 49ers 14.

Philadelphia Iggles (-3) vs. Bear Down Chicago da Bearz. The NFC North is ruled by the Vikings and the Packers and Bears are the middle class. Detroit is serf-like. Unfortunately, football has nothing to do with feudalism. Chicago might go down the pecking order when faced with a good team like the Eagles. It's difficult to stop Donovan McNabb because of his running ability and he also has good receivers like DeSean Jackson and Brett Celek. Iggles 59, da Bearz 3.

Good thing Gino is off hunting right now, otherwise he'd be getting after you, Lollipop Guild Graduate. What is it with Chicago quarterbacks? Jay Cutler used to look like a real quarterback. Now he looks lost. I suspect the Bears will play better this week. I also suspect it won't be enough. Eagles 27, Bears 16.

Well, Decrepit, I have nothing to do with the Lollipop Guild! And since I'm going to be 14 tomorrow, that means you're going to have to start wearing that Senior Discount baseball cap that you sell.

Okay, young fella. Just be sure to remind your readers that it makes a lovely holiday gift.

Sounds good, Decrepit. Buy the cap, you refugees from the 70s! Ben out!

eagles 50+ favorites benster?
dabears arent doing well, but they aint that bad either.

btw: methinks you need to brush up on yer skeeball because i'm thinkin bout paying a visit in the spring. i'll even tie one hand behind my back to make it fair. ;)