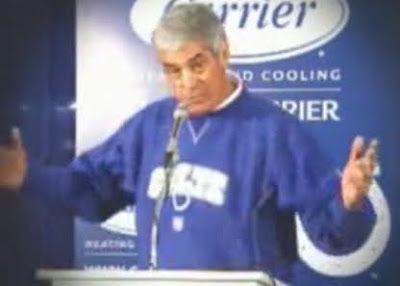 Well, we're back. And we're going doing the things we do.

And what are those things?

Picking some football games and adding a little outrageousness, all at no extra charge. You should know that by now, Decrepit! Unless you've been living under a rock.

Well, I think you know where I live, Seabiscuit.

Well, last week you were living in my wake, because I kicked your behind! And yet you come back for more. When it comes to abuse, I'm open 24/7/365!

Illinois Fighting Zooks (+7) vs. Minnesota Golden Gophers. Juice Williams is back from the dead! After a confidence-boosting win against "Hail to the Victors" (who aren't, by the way), they come up to the Twin Cities, but Adam Weber has found some weapons in the absence of Eric Decker and I am expecting to see some Marqueis Gray out of the Wildcat, too. Minnesota 31, Illinois 20.

That's a surprisingly sensible pick from you, youngblood. That's about the way I see it, too. The Illini are a major disappointment and Gophers have a chance to get into some bowl in Detroit or something. So I'll assume they can get this job done before hated South Dakota State comes calling. Gophers 27, Illini 20.

Beloved Wisconsin Badgers (-10 1/2) vs. Indiana Wants Me, Lord I Can't Go Back There. Not surprisingly, you can blame Decrepit for that evil hyperlink. R. Dean Taylor, Dad? Really? What is wrong with you? Let's get back to the game. After Indiana's nightmare in Iowa City, hardcore Hoosier fans will forever call the Iowa quarterback Ricky Freaking Stanzi. Or maybe Ricky Bleeping Stanzi. Foul language is a given. Anyway, you'd think the Hoosiers would get some salve from the schedule. Yeah, right. They have to play a very good Badger team, which trounced Purdon't last week. Wisconsin 49, Indiana 2.

Well. I'm not sure it will be that bad. Indiana isn't helpless and the game is at home. But it's a winnable game for the Badgers, who smell a good New Year's Day game in their future and won't let the Hoosiers get in their way. Badgers 31, Indiana 17.

The Ohio State University Buckeyes (+3 1/2) vs. Penn State Paternos. A very good Big 10 game will be going down in Happy Valley. Penn State -- I've said it before -- is the best team in the Big 10. In fact, I'm even going to say that Darryl Clark is better than Ricky Stanzi. Penn State gets the win and stays on track for a big bowl game. Penn State 29, Ohio State 24.

I tend to agree that Penn State is the better team. However, it's close. And Ohio State really needs this win to salvage their season. With Iowa on the horizon, if the Buckeyes stumble here they could be off the New Year's Day schedule. And they wouldn't like that. Ohio State 21, Penn State 17.

Glorious Green Bay Packers (-9 1/2) vs. Tampa Bay Agent Orange. The Bucs are wearing their awful orange throwback uniforms this week, which won't win on Project Runway. Also, they gave up a home game to play in Wembley Stadium and I'm surprised the Customs officials let them back in the country. Unline Indiana, Green Bay will get some salve this week. Packer Backers 50, Agent Orange 0.

So that's a silly pick, too, but I understand the impulse, young fella. The Packers used to kick Tampa's butts back in the day, especially when Tampa wore those awful orange uniforms. This will be nostalgic. Packers 34, Bucs 13.

Arizona Cardinals (+3 1/2) vs. Bear Down Chicago da Bearz. Arizona is a Jekyll-Hyde team. Last year they almost won the Super Bowl and now they're unmasked. It doesn't help that they're in the Central time zone this week, which might cause some fatigue. Da Bearz will win. Chicago 37, Cards 27.

You are way too young to remember this -- heck, I'm too young, too -- but the Cardinals used to play in Chicago until about 1960. They never won much in Chicago when they played there then, either. Some old South Siders might still love the Cards after all these years. But the Bears won't care. Bears 27, Cardinals 24.

Motor City Kitties (+10) vs. Seattle Seabags. Well, everybody, the Walrus has left Seattle for Antarctica, where he's currently on an ice drift somewhere. Instead, Jim Mora Jr. is the coach in Seattle and he should win, because the Lions really bring the stink. Watch Seattle win in a driving rainstorm, because it's Seattle. But Jim Mora's dad was a lot funnier. Seabags 40, Lions 10.

I don't know how to pick this game. Both of these teams are terrible. Seattle's at home, so I guess they should be favored, but I'm not convinced that the point spread makes much sense. Look for a really ugly game and I'm hoping that Benster is right and they play in the rain, because NFL Films needs some more new blooper footage and these two squads are fully capable of producing some bloopers. Seattle 17, Lions 12.

Hey, do you know what I'd like to see? The 0-14 Bucs against the 0-16 Lions. It would be a throwback game, a scoreless tie! NFL Films is coming to town!

Back in those old days, a reporter asked Tampa Bay coach John McKay what he thought of his team's execution. McKay replied, "I'm in favor of it." One of the funniest lines in sports history. Glad he had a sense of humor about it. Thanks, grasshopper. Any last words?

the bears-49rs game will be interesting in that it pits a lovie smith and mike singletary against each other.
mike is a world champoin,hall of fame chicago bear.
lovie is a great admirer of his playing days.

bear vs bears.
either way, the bears logo will not be tarnished this weekend.

Wow, you guys are ... well, whatever you are it's not good! These make me worry that you'll be just as wrong with your prediction on how the healthcare debate will play out.

By the way, what's your over/under on the H1N1 virus? I need to know whether or not I should be concerned.

Someone get Crankbait some Preparation H.

Sometimes you win, sometimes you lose, Crankbait. But when your lead prognosticator is a 13 year old boy, you take your chances.

As for H1N1, since you have such an utter lack of confidence in our abilities, I'd suggest you're going to get it for sure. That should you make you feel better!

My comments, as with your prognostications, are for entertainment purposes only.

Count me in as one person who is now officially on the Can Mike McCarthy bandwagon. Brett Farve must be enjoying shautenfreud at it's highest levels!!!!

I'm entertained, too. Just wanted to give the Benster back a little of the attitude he was dishing (I believe the youngsters refer to it as "'tude" these days), especially toward the senior partner. Grumpy old men stick together.