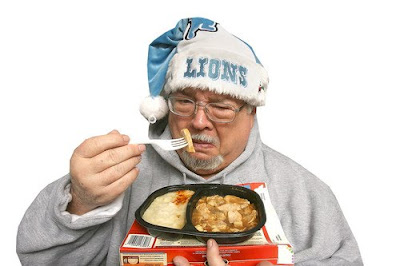 What's shakin'? Benster is here and we're going to cover the games that you might watch after you've stuffed a whole mess of turkey down your throat.

I'm hoping that they chew it a little first.

Friendly pilgrims, the picking is here. Chew on some of this:

Glorious Green Bay Packers (- 10 1/2) vs. Motor City Kitties. It's Detroit's chance to embarrass themselves on national television! Fearless Maria is standing right here and she asked, "don't they always?" Well, yeah, Maria. They do. Green Bay is back from the dead but they are without Aaron Kampmann and Al Harris, which would hurt them if they were playing a real NFL team. Fortunately, they aren't. MattStaff (a/k/a Matthew Stafford, rookie QB for the Lions) is out with a separated shoulder. Even though he showed some toughness on Sunday, he needs to stay on the bench this week. Calvin Johnson is listed as questionable, which means that ol' Daunte Culpepper might have to run for his life. Packers 80, Kitties 3.

They do play a little defense in Detroit, Seabiscuit, so I'm guessing that the Packers aren't likely to score 80 points. However, they will score a fair amount and if Stafford and Johnson are unavailable, it will be yet another truly ugly Thanksgiving in Detroit. Packers 34, Lions 17.

Bear Down Chicago da Bearz (+10 1/2) vs. Minnesota Vikings. Jay Cutler, come on down! You're the next contestant on the show, "Can You Survive Three Guys and a Mullet?" Cutler is a big fat bust. In fact, I might even call him Ryan Leaf. Cutler could be a good quarterback this season if interceptions and demanding trades counted as good statistics. But they don't. And I wouldn't be surprised if Jared Allen chases him right out the Metrodome doors into oncoming traffic. It's going to be a normal Vikings victory. Vikings 50, da Bearz 10.

I don't know what to say about Cutler. He has a fabulous arm and a two-cent head, based on what I've observed this year. The Bears have really mortgaged their future for this guy and it's a shame. No, wait a minute -- I'm a Packer fan. This is justice. Sweet, sweet justice. Meanwhile, da Bearz aren't likely to do much on Sunday. Vikings 34, da Bearz 13.

New England Belicheks (+3) vs. New Orleans Saints. Get your popcorn ready -- Tom Brady is coming to the Superdome to play the big, bad Saints, led by my man Drew Brees, fantasy football star extraordinaire. You can't stop the Saints and the Saints defense could get into Brady's grill. I'm not down on Brady; I'm just saying it's going to be a hostile environment. Saints 63, Belicheks 56.

That's a basketball score, Ben. You realize we pick football games 'round here, right? No matter. I have a feeling about this game. The Patriots need to make a statement and this is the place where they make it. Vikings fans take note: you could be seeing a home field advantage happening this year, just like '98. Maybe it will turn out better this time. Patriots 31, Saints 27.

Alabama Crimson Tide (-10 1/2) vs. Auburn Tigers. Alabama is #2 in the nation according to the random old dudes and sputtering computers that make up the Big Conference Shutout (BCS). 'Bama should win but Auburn might be willing to play spoiler and they might. Auburn 40, Bama 37.

I'm not sure that Alabama has given up 40 points all season, Skywalker. In any event, they have been able to win the games that matter up to this point and while Auburn is a traditional rival and generally a very good program, they aren't quite at their usual high standard this year and Bama will win. Alabama 21, Auburn 10.

Notre Dame Golden Domer Twinks (+10 1/2) vs. Stanford and Son Cardinal. Hey Charlie? Feelin' the heat? You could be out of a job after this game. Just like Ty Willingham. And Bob Davie. And Gerry Faust. Oh yeah, those Notre Dame alumni don't like coaches who don't win much. And you don't. Stanford won at USC by a lot and with that in mind, Stanford won't roll over and die to the Irish. Cardinal 31, Fire Charlie Weis 21.

It's not easy being Charlie Weis these days. That much is certain. The expectations are so very high in South Bend and I wonder if the level of excellence the Irish once had is even sustainable these days. It doesn't help that Stanford turns out to be pretty good. Stanford 27, ND 16.

Cretin-Derham Hall Raiders (NL) vs. Eden Prairie Eagles. For those of you who don't know who the heck these guys even are, this is the Minnesota State 5A championship game. Decrepit picked this game because the college ranks were pretty thin, and I can't blame him -- I have no interest in picking the Coe vs. St. Thomas game. I don't follow high school football that much, but I do know that these guys are both powerhouses. I think Eden Prairie will win because they have more experience playing at this level. EP 31, CDH 20.

Actually, Cretin has a glorious sports history, being the alma mater of Joe Mauer, Paul Molitor, Chris Weinke, Steve Walsh and a host of other luminaries. This year the Raiders feature the #1 recruit in the country, the enormous offensive lineman Seantrel Henderson, who is about 9'4" and weighs something like 7,230 lbs. Okay, I might be exaggerating a little, but he's a huge dude. Having said that, I think Eden Prairie won't be intimidated by Mr. Henderson (and any dude that big is automatically a Mister) and their overall balance and power will win the day. Eden Prairie 21, Cretin 16.

Jay Cutler also reminds me of Ricky Stanzi, the Iowa quarterback that I love to rip. What does Seantrel Henderson eat, anyway? I think it must be old warehouses or something. Ben out!
Posted by Benster at 6:30 PM

Wow Ben, you're really harsh! I was thinking about giving you the nicest football picker award for this year, but ...

p.s. I think the Lions are going to get at least a few points.