I am not finding a link to a remarkable letter that New Brighton city council member Brian Strub wrote, which appeared in the Nov. 30 edition of the New Brighton Bulletin, so I'm forced to retype it here.

Every year elections would have saved New Brighton taxpayers thousands, for many years, and increased voter participation -- we had only 2,900 voters in 2015. Gina Bauman stood in the way of this common sense change and flip-flopped from her initial support for this measure after realizing that it could shorten her own 12-year political career if she lost another election.

In contrast, I proposed shortening council terms, including reducing my own, for all four council members. When was the last time an elected official voted to reduce their term in office? I did on November 10, 2015 and the ordinance passed 4-1.

In the year since, Bauman claimed support for a popular vote on the November 2016 ballot. This vote did not occur because of Gina Bauman. Just days before the legal deadline Bauman submitted a petition full of errors and mistakes. Over 30 signatures were rejected for including minors, ineligible voters, and non-residents. A number of petition signers supported the even year change but were confused by misleading labeling on the petition. If submitted sooner, the city would have been legally obligated to provide an opportunity to correct the petition errors. Waiting until the last minute took away your ability to vote on even year elections.

Bauman's efforts to fight even year elections has distracted the city council from more pressing issues. I for one, am ready to discuss other issues that improve the quality of life in this fine city of ours.

As anyone who has followed this case knows, nearly every assertion Strub makes here is false. The findings of fact in the case before Ramsey County Judge Lezlie Ott Marek were clear. As a reminder, I republish the order from Judge Marek, which includes the findings of fact from the case, below: 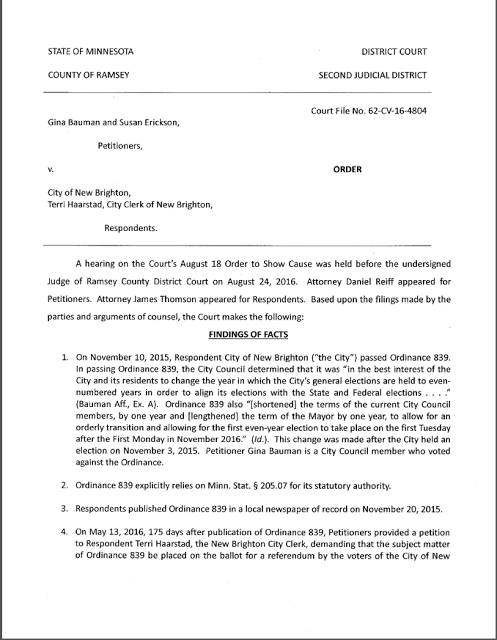 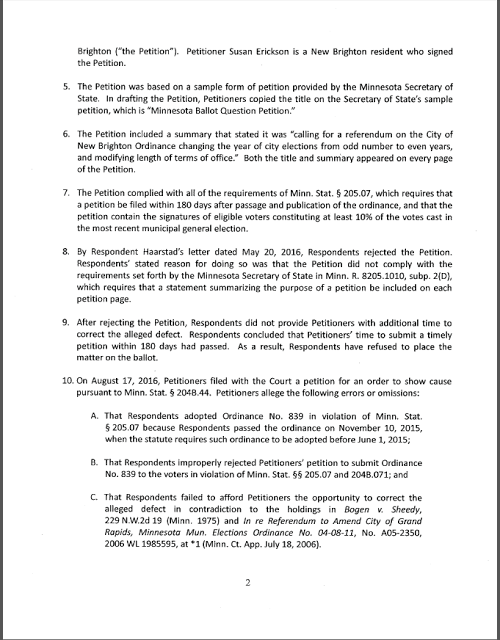 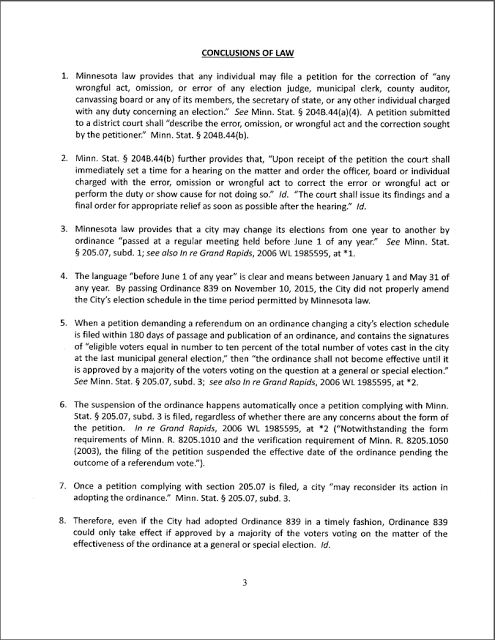 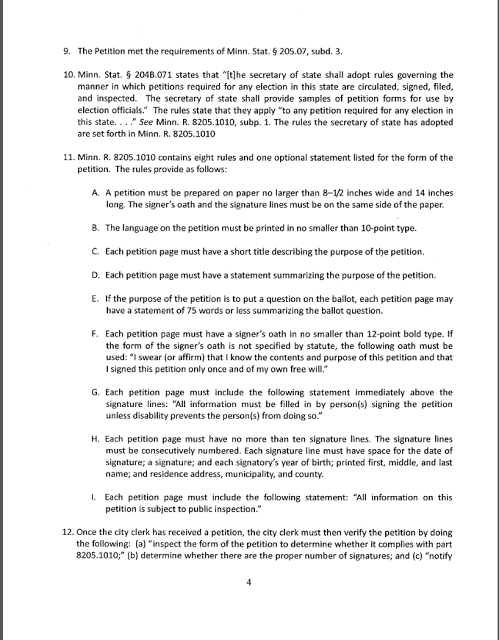 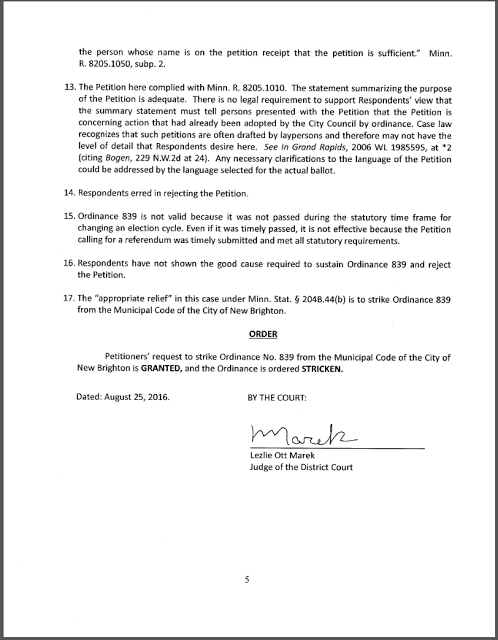 
Now, a few questions for Mr. Strub:
Gina Bauman had every right to pursue the remedies she pursued and she did so properly. Brian Strub can spin it any way he'd like, but the facts of the case are clear.
Posted by Mr. D at 5:54 AM

As somebody with no dog in this fight, I see what you have said about what is legal, and I might infer what is "right," but you haven't told me whose "side" I should be on, if I were offered a chance to choose sides. And why?

Jerry, I’ve written multiple posts on the subject. I can’t imagine any reason you’d think I’d be for a group of individuals who don’t pay attention to relevant statutes and then get their butts handed to them in court. The rest of the council doesn’t like Bauman because she questions what they do, especially in regard to spending taxpayer money and having a clubby relationship with municipal employees.

The reason I ask Council Member Strub in this piece if he’s going to reintroduce his ordinance for 2018 is to find out the real goal — is he trying to save money, or is he trying to find a way to get Bauman off the council, because she’s a meddlesome priest?

Thank you. I suspected Bauman was the "troublemaker" for being common sense and a bit conservative; at least that was my recollection. I just wanted to be reminded. We used to have somebody like that on our school board, who, after years of 8-1 votes, decided to quit. Hang in there!

My brother used to be on the Mountain View, CA city council, and he had a lot of the same experiences as did Jerry. One funny time was when he was visiting, and we had other friends over....Greg on the city council, Papa Gregory having had a running feud with the Riverside, CA city council and school board. They got along famously because both agreed that city council members had to be either insane or grifters/developers in search of a favor.

My take here is that our host's city council has purchased itself a lot of trouble because they were trying to play games for political advantage, and were hopeful that nobody was looking. Hopefully more voters were. We need more city councils which are happy with a small, metal "welcome to " sign instead of the concrete and stone edifices that are ever more popular today.