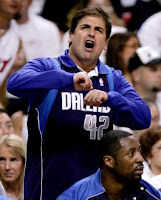 The Securities and Exchange Commission has charged that the flamboyant internet entrepreneur and owner of the Dallas Mavericks engaged in insider trading. The allegation stems from a 2004 transaction involving shares in Momma.com, a search engine company. The complaint alleges that he received word that an offering of stock in Momma.com was in the works and he sold his interest in it, saving about $750,000.

This guy is a billionaire. He's also an odd duck. But you have to wonder -- why the heck would he do something like this, given the vast wealth he's accumulated in other ventures? It's been said that there's a bit of larceny in every human heart, but to put himself at risk seems pretty bizarre. Then again, the guy wants to buy the Cubs, so maybe he's got something wrong in the ol' cabeza.
Posted by Mr. D at 7:45 PM