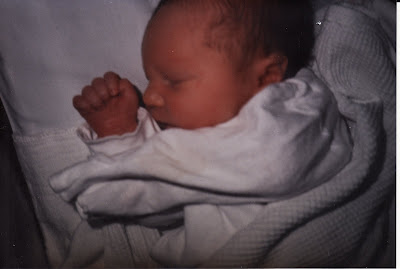 I remember it being a cold but sunny Tuesday morning. As it turned out, two things happened that day that are historic. First, the Dow Jones industrial average climbed over the 5000 mark for the first time. At Wright-Patterson Air Force Base, the Dayton Peace Accords were initialed, marking the end of the war in Bosnia-Herzegovina. And at 1:52 p.m. CST, in a room at United Hospital in St. Paul, our first child was born.

We'd had a bit of a scare a month earlier and Mrs. D had spent about a week in the hospital with pre-term labor. She'd returned home and had been on bed rest. When we woke up that morning, it was clear that something was up. We called the hospital and they told us to come down. We worked our way down from our townhome in Shoreview, stopping once so I could get my cup of morning coffee. Momentous events require coffee.

Once we got to the hospital, we went to our room and Mrs. D went through the experience. Things were progressing along slowly but it seemed possible that this would be the day. The nurses and doctors came and went, none seemingly too worried about things. It was possible that it might be days before the baby would arrive, we were told, or the baby might come today. It seemed like a long morning. We'd been through the Lamaze classes and we were clued into what we might expect. We'd brought music to listen to and Mrs. D's favorite teddy bear, which she'd received as a gift in college. Whatever it took.

As the morning dragged toward noon, she turned to me and said, "look, I don't think anything is going to happen any time soon. Why don't you go and get some lunch. Take your time." Knowing that she was in good hands, I left the hospital and walked down to a Subway shop on West 7th. I got myself a turkey sub and a Pioneer Press and had a good long hour of decompressing. Although we were both excited about the possibilities of the day, it was good to get away and think about things other than the life-changing event that might happen. I strolled back to the hospital, got on the elevator and headed for the maternity ward.

When I got back, it was obvious that Mrs. D had had an eventful hour in my absence. She was rocking uncomfortably back and forth in the bed and she looked at me and said, "you can't leave now." There was a nurse nearby and we were told that the obstetrician would be arriving shortly. "It looks like the baby is going to come today," I was told. The next hour was a blur. I remember trying to hold Mrs. D's hand, and hold the teddy bear to give her a focal point. I remember trying to fish through our bag to change the tape (yep, we still had cassettes). I put on some Miles Davis - Kind of Blue, a favorite and something that would be comforting enough. As the bottom of the hour passed and we headed toward 2, it became pretty clear that this was the time. A close family friend had arrived to offer support and was pretty much horrified to realize that she had walked in at the moment of truth. She quickly beat a hasty retreat the waiting room. I will never forget the look on the friend's face.

Meanwhile, the moment had arrived. Childbirth is simultaneously amazing, frightening and a little bit bizarre. As the song "All Blues" wailed softly in the background, I saw the baby emerge. It was our son. As the nurses quickly took him to the side table to give him his first exam, the Apgar score, he let out a healthy wail. Mrs. D looked at me. I looked at her. It was the beginning.

My son is a 7th grader and is straddling the childhood he is leaving and the exciting world of adulthood that is beckoning. He's turned into a bright, energetic kid with a quick wit and a great enthusiasm for learning more about the world he entered that cold, clear Tuesday. He's been a source of great joy.
At times, it's obvious that 13 years have passed. But it still seems like we just brought him home from the hospital.
Posted by Mr. D at 7:04 PM

When we got to the hospital, about 11 a.m., I realized we had forgotten something. I was so worried that I would miss the big moment if I left. The nurse laughed at me, and told me to go.

12 1/2 hours later JR was born. I hope you remembered to take off your ring. I remember sitting there in pain, albeit not what she was going through, from her crushing my hand and my ring digging in to both fingers on either side.

It is quite a unique experience. Far cry from the days of our fathers, who had to sit in the waiting room. Which of course was different from their fathers. My dad was birthed on the kitchen table in their house.

What, no birthday poem from Picklesworth?

Happy Birthday, Ben and thanks for the story Mr. D. I remember lifting heavy machinery in the delivery room between my wife's contractions with our first child, and how the right sleeve of my chambray shirt was two inches longer than the left after our second child was born, due to my wife wrapping her fingers in it during the tougher moments.