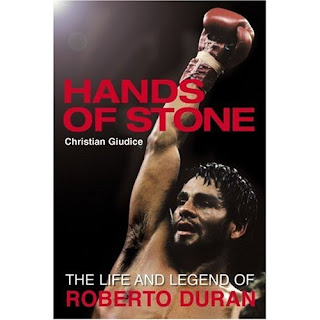 If you're as old as I am (and if you are, enjoy that Early Bird Special!) you probably remember the great boxer Roberto Duran. He was a fearsome figure in the ring and he was said to have manos de piedra, which translates to "hands of stone" in English. That's a good physical characteristic for a welterweight boxer, but not so much for an NFL receiver. We'll get to that in a moment. First, let's talk about some other games. And a tip of the sombrero to this guy for suggesting the title of today's picks.

Kimberly Papermakers 41, Verona Wildcats 10. Tomorrow's game decides the WIAA Division 2 championship and, at least theoretically, this should be a tough game for the Papermakers. But the last four games should have been, too, and the red-clad scourges from just north of Darboy have been leaving a path of destruction in their wake. No reason to assume it's going to end tomorrow.
ACTUAL RESULT: KIMBERLY 28, VERONA 14. Congratulations to the Papermakers!

Wisconsin Badgers 31, Cal Poly Mustangs 14. This one probably looked like a walkover when it was scheduled, but the Div I-AA Mustangs come into the contest 8-1 and have the look of a team that merits respect. If the Badgers lose this one, they could be looking at a very bad bowl game, so they need to take care of business. The guess here is that they will but that it won't be easy.
ACTUAL RESULT: BAD-GERS 36, POLY 35 (OT). Polly wanna cracker? Poly needs a kicker. My goodness, what an embarrassing performance. But it could be worse. Read on.

Minnesota Golden Gophers 24, Iowa Hawkeyes 20. Iowa has really turned it around after a poor start to the season and the Gophers are probably still sucking wind after their tough loss in Madison last week. By all accounts, this is a game the Hawkeyes should win. That's why I'm picking the Gophers.
ACTUAL RESULT: IOWAY 55, LAKELAND DENTAL ACADEMY 0. I'm not sure who should be more embarrassed - the Gophers for offering the worst performance they've ever offered in a Big Ten game, or me for actually thinking the Gophers would beat Iowa. Feh.

Green Bay Packers 34, New Orleans Saints 27. As much as I love my Packers, they've been a little, shall we say, schizo this year. They really had it going on against the hated Bears last week, which augurs a bit of a letdown against an erratic but dangerous Saints team. Drew Brees is very good but the Saints don't play much defense. The guess here is that the Packers play a little bit more.
ACTUAL RESULT: SAINTS 51, PACKERS 29. What do you call a team that wins 37-3 one week and loses 51-29 the next? 5-6 sounds about right.

Jacksonville Jags 24, Purple Helmeted Love Warriors 21. Remember Troy Williamson? He was the speedy wide receiver the Vikings drafted a few years back with the hand-eye coordination of the Venus de Milo. He's been shunted off to Jacksonville this year where he has accomplished, well, nothing. For some reason, he's blaming Brad Childress for his inability to play the position at an NFL level and has apparently challenged the Chiller to a fistfight at the 50-yard line. This may be one of the more hilarious developments surrounding the utterly humorless Purple in some time. Do you suppose that if Troy Williamson can't catch a pass, he would have the ability to catch Chilly's jaw with a right cross? I'm thinking Troy Williamson will punch more like these guys than Roberto Duran. I think it likely that the Jags will say "no mas" to this sideshow pretty quickly. As for the game, the Vikings don't do well on the road, or in Florida. Hard to see either trend changing this week.
ACTUAL RESULT: VIKINGS 30, JAGWIRES 12. Jagwire, as in haywire. The Vikings are offered repeated gifts and have the wit to accept them. Give the Purple the nod.
Posted by Mr. D at 5:26 PM

Wisconsin needs the Cal Poly kicker to miss not one, not two but three extra points in order to escape with a home victory over a program that competes in 1-AA? Unreal.

Yet through it all, they finish ahead of the Gophers and wind up in a better bowl. Cal Poly plays a unique style. They would most certainly have beaten a couple of the patsy's that played Minnesota. There is still no excuse for the game being that close, but life's not fair. Enjoy the Motor City Bowl Gopher Fans!

The big difference being Wisconsin was EXPECTED to contend in the Little Ten Conference and came nowhwere close. Long live Brett Bielema, a.k.a., today's version of Don Morton. ;)