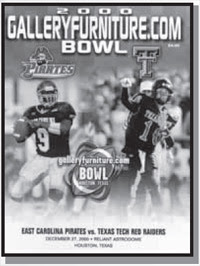 Hi everyone. I was just explaining something to my dad here.

I need a lot of explanations from you these days, Seabiscuit.

Yeah, whatever. Here's the thing, old fella. I'm looking at this bowl schedule and most of these games would be boring if they happened in the regular season? I mean, look at the first one out of the chute, the epic New Mexico Bowl, which features BYU and UTEP. Can you say, "limited regional audience?" Ordinarily this is the sort of game that doesn't even make it on Versus! I gotta be honest with you, Geritol Fan -- I'm not feeling the HYYYYYPPPPPPE!

So you're not going to pick the winner of this game, I take it.

No. I think both teams are like Bugs Bunny and took a wrong turn at Albuquerque. And unless Bugs and Daffy are announcing the game, I'm. Not. Interested. But do you want to know what I'm really interested in?

Besides that. Geez -- we're trying to do a professional blog post here, Decrepit, and you start bringing in my social life? C'mon, man!

I was just trying to answer your question.

It was a rhetorical question, you jackwagon. I'm interested in professional games. But I will pick one especially magical bowl game this week. Watch me work:

Bear Down Chicago da Bearz (OFF) vs. Minnesota Patrick Ramseys. So now the Vikings are bringing quarterbacks in from off the street. Why not? I'll bet Daunte Culpepper is just waiting by his phone, but it never rings! So sad.... But anyway, I guess they brought in Patrick Ramsey because Gary Cuozzo wasn't available. This game will be played at TCF Bank Stadium, because the Metrodome roof has more holes in it than the Viking defense. And that's saying something. This might sound wishful, but: Fran Tarkenton 10, Bob Avellini 7.

Huh. That is wishful thinking, I suspect. I don't think the Bears are really that good -- New England pretty much proved that -- but they are generally pretty resourceful and the Vikings are running on fumes. No Fav-ruh. No T-Jack. No stadium. No clue. It should be fun to watch the Vikings play out in the cold, but I suspect the result will leave their fans cold. Bears 24, Vikings 13.

Glorious Green Bay Packers (OFF) vs. New England Belichecks. Interestingly enough, another streak might be in jeopardy on Sunday. Aaron Rodgers has always answered the bell, but he had his second concussion of the year last week in Detroit, so he may not play. That's not good news for the Packers. Packers quarterbacks have never missed a start since the days of Don Majkowski, back in the bad old Lindy Infante days. However, the Patriots have nothing to play for, because they hold all the tiebreakers in the AFC. Also, remember that last year the Packers lost a game they shouldn't have against the Tampa Bay Creamsicles and they responded with a winning streak. I'm putting New England on upset alert. Packers 70, Benjarvus Green-Ellis 49.

Let's look at this rationally, young fella. I know you're not fond of that approach, but humor me here. If Matt Flynn couldn't beat the Detroit Lions, how is he going to beat the Patriots? In Foxborough? Without any running backs? I'd love to believe it's possible. But I don't. I do think Flynn will play surprisingly well with a week's worth of practice reps. But the Green Bay defense had better bring their A+++++ game. New England 24, Green Bay 16.

Philadelphia Cheesesteaks (+3) vs. The New York Football Giants. Decrepit and I will get to see The New York Giants get their butts kicked at Lambeau next week, so they'd better win this one. The Giants and the Eagles are tied right now, so this game is pretty crucial, but Philly won the first game, so Philly technically is in the lead. I think the Giants will win because they can keep Michael Vick off the field with their running game. All Hail The New York Giants 44, PETA 7.

Speaking of PETA, I read that Michael Vick has expressed an interest in getting a new dog. Might I suggest he start with Sea Monkeys and work his way up? Anyway, back to the game. I suspect the Giants are the better team, but I also wonder about how they'll react to the excellent adventure they had last week, in which they set off for Minnesota, got stranded in Kansas City and ended up playing a game in Detroit. They had a pretty hinky week, wouldn't you say? Playing the hunch, I say: Philadelphia 27, New York 20.

Beef O'Brady's Bowl!!!!!!! Yes, that's right -- I said the Beef O'Brady's Bowl. Live it, learn it, love it! Oh, excuse me, I need to tell you what teams are in it. Ahem. Louisville Cardinals (-3) vs. Southern Mississippi Golden Eagles, in Leningrad, Soviet Union. Wait -- this just in. The game is actually in St. Petersburg, Florida. Looks like I got some outdated information there. That's the last time I'll trust Brezhnev! I'll be honest -- I don't know a lot about these teams. I'll also be even more honest and tell you that I don't want to know much about these teams. This game is dull. But let's face it, since it is the Beef O'Brady's Bowl, I have to care a little. Because in this life, we all need a little Beef O'Brady's, now don't we? I'm pretty sure that Rick Pitino (of Louisville) and Brett Favre (of Southern Mississippi) are not involved in this game whatsoever. But they'll be back at Beef O'Brady's, sharing a basket of onion rings with a side of tasty haggis. Louisville 20, Southern Miss 19.

I don't believe they sell haggis at Beef O'Brady's, youngblood. But look at it this way -- if an obscure sports bar chain can take over a fourth-rate bowl game, perhaps some day we can take over a bowl game ourselves. I can see it now, the "Benster and D Pick Your Game Bowl," played at the Fargodome. It's gonna be hot. And we can invite Bowling Green and Wofford or something. As for the game, I guess I'll pick Southern Miss because I've been disagreeing with you on every pick, so why stop now? Southern Miss 31, Louisville 24.

You want haggis with that? Ben out!
Posted by Benster at 7:53 PM

i'd say this week will pretty much sew up the bears' dominance in the division.

a win for bears, a loss for cheeseheads... and it doesnt matter what happens after that...

unless GB comes to chi on a wildcard.

It would be a stunning turnaround if they didn't sew it up. If the Bears can protect Cutler and keep him off the concrete they should skate by.