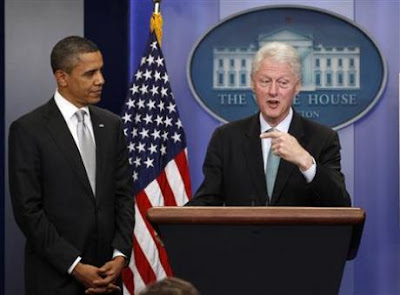 So who was that guy standing at the podium at the White House yesterday?

Obama introduced Clinton lightly as "the other guy" and recalled how Clinton has overseen heady economic times. Obama warned that he wouldn't be staying long -- another White House Christmas party was waiting, as was his wife, Michelle.

And so it became clear pretty quickly that this was Clinton's show.

"I feel awkward being here, and now you're going to leave me all by myself," Clinton said from the stage of the White House briefing room.

Clinton comfortably outlined how the pending package of tax cuts, business incentives and unemployment benefits would boost the economy -- even though it included tax help for the wealthy that Obama had to swallow.

Think about this for a minute. Could you have ever imagined any other president turning over the podium to a predecessor? If George W. Bush had let his dad run a press conference, his presidency would have been over at that very minute. Could you have imagined Richard Nixon giving Dwight Eisenhower one last turn? Or John Kennedy kicking it back to Harry Truman?

And the reason -- because he was late for a freaking Christmas party? Wow. Just wow.

On the other hand, at least one pundit saw it coming. I give you Iowahawk, writing in November, 2008:

Ending weeks of speculation and rumors, President-Elect Barack Obama today named Bill Clinton to join his incoming administration as President of the United States, where he will head the federal government's executive branch.

"I am pleased that Bill Clinton has agreed to come out of retirement to head up this crucial post in my administration," said Obama. "He brings a lifetime of previous executive experience as Governor of Arkansas and President of the United States, and has worked closely with most of the members of my Cabinet."

Clinton said he was "excited and honored" by the appointment, and would work "day and night" to defeat all the key policy objectives proposed by Mr. Obama during the campaign.

"I am gratified that the President-Elect has entrusted me with this important responsibility," said Clinton. "I'm looking forward to getting back behind, and under, the Oval Office desk again.

As I have told the President-Elect, I pledge to do whatever I can to serve his historic administration by making sure that none of that bullshit he talked about during the campaign will ever see the light of day. Americans can rest assured that he will be safely confined to the East Wing, as far away as possible from any potentially dangerous office equipment or nuclear buttons."

What can we learn from this? Well, two things:

Satirists like Iowahawk often understand things better than pundits do -- I'm looking at you, Charles Krauthammer; and

I am planning to ask Iowahawk to pick out my Powerball ticket numbers.

Only one regret -- I would have preferred that the White House wheel out an animatronic Harry Truman instead.
Posted by Mr. D at 9:54 AM

I read about this yesterday. How freakin' weird is this?! I had to actually read the article twice to believe it was actually true and not some Onion piece.

And the excuse for BO leaving? A Christmas party?! What?!

and they call sarah a quitter...

I never thought I'd be yearning for Bill Clinton but it would be a move to the right (and the correct) direction for the country. Iowahawk's 2008 post is prescient.

Weak? I assume that refers to Krauthammer--he hardly ever misses.

Is it just me, or did Peebo waddle off stage as if he had something long and leafy secreted in his nether regions?

Also, am I the only one that had Tombstone running in my head?