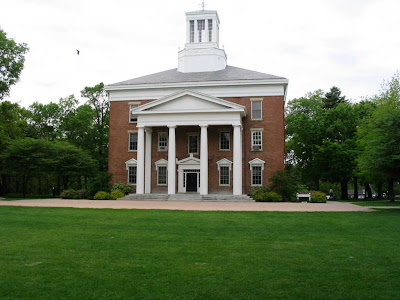 About this time each year my beloved alma mater, Beloit College, reminds the rest of us that we are really, really old by releasing their annual Mindset List. This list was initially prepared about a decade ago as a way to help the then-aging faculty understand what the incoming freshmen were likely to know and, more importantly, were likely not to know. Beloit has done a good job of leveraging this list into an annual publicity bonanza. My old professor/advisor Tom McBride has annually appeared on the Today show to present the list to a nonplussed nation.

As is usually the case, the first list was very effective, offering such jaw-dropping assertions that the incoming students of the Class of 2002 had no effective memory of vinyl records, Jordache jeans or a world without MTV. The first list also had moments of wit, pointing out that, to the incoming members of '02, Michael Jackson had always been white. These days, the list primarily serves as a reminder that more and more of us are eligible to enjoy the early bird special at Cracker Barrel.

But beyond that, a decade on, the list tells you more about Beloit College, and academia generally, than it does about incoming students. Among other things, this year's list points out three things in particular:

There have always been gay rabbis.

Radio stations have never been required to present both sides of public issues.

I'm wondering: do 18-year olds spend a lot of time thinking about gay rabbis? Should they? And does a generation whose members routinely stand naked in the public square by posting just about everything about themselves on MySpace or Facebook pages really dwell much on threats to personal privacy? And is there really a great groundswell of concern among 18-year olds about the absence of the Fairness Doctrine?

Perhaps the incoming students will care about such things after getting a Beloit College education. The best thing about Beloit is that you can learn certain habits of mind, including a certain amount of skepticism about some of the prevailing nostrums in academe. But first you have to run the gantelet of foolishness that's endemic in this list. And I'd like to add one more thing to the list:

A small Midwestern liberal arts college has always issued a list of purportedly revelatory information about how things have supposedly changed, including observations concerning a variety of issues that typical 18 year olds rightly ignore.

Good luck to the Class of 2012. Maybe we'll see some of you at Homecoming next year.

Let me try this again...

I thought this list was older than that. Here's an interesting idea. Make these lists for various classes. For example, what would have been the list for the Beloit College class of 1985? I mean, it would be revisionist history, which we Heurings love (according to the original Red Scourge).

Remember, the list can become more politicized now because we have to impugn Chimpy at every, and I mean every turn.

Here, I'll balance this out just a little bit.

-Incoming freshmen have never known a nationally elected Democrat who wasn't in the pocket of "Big Granola".

-Incoming freshmen have never known a school system that was more interested in educating rather than indoctrinating them.

-Incoming freshmen have never known a Hollywood that showed patriotism without irony.

...There has never been a Soviet Union (yet).

...There has always been one Germany.

...Nelson Mandela has never been in prison.

...Salman Rushdie has always been under a death sentence.

..."Imelda" has always been the nickname of someone with a lot of shoes.

...Ronald Reagan has never been president.

...Pete Rose has always been banned from baseball.

...There has always been a Sega Genesis.

...Iran has always been pissed off.

I went to grad school with someone who went to Beloit College. You are now #2 on the list of BC alum I've come across.