In Her Mouth, An Amethyst 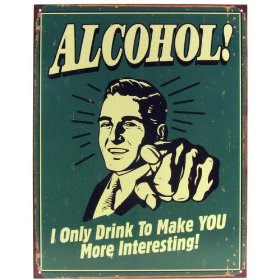 So a bunch of college presidents have done something interesting recently - they've called for a discussion about rolling the drinking age back to 18. They've started something called the Amethyst Initiative in the hopes of moving a ball that hasn't really moved at all since 1984, when the Feds essentially ended the debate by threatening to withhold a percentage of federal highway money to any state that didn't get in lockstep with a 21 drinking age.

The reaction has been unsurprising. The primary force that drove the change is Mothers Against Drunk Driving, which has followed the path of many similar organizations that were founded for one reason but that morph into something else over time. Let's stipulate that no one supports drunk driving. Drunk driving was a significant problem when I was growing up and while I never have personally driven drunk, I was a passenger in cars driven by drunk drivers more times than I care to admit. It was a foolish risk to take and I am fortunate that we never were part of any carnage on the highway. It's an unalloyed good thing that drunk driving is taken much more seriously now than it was.

Having said that, I think the college presidents have a legitimate point. And MADD's reaction to this initiative is so over the top that I think that Glenn Reynolds's characterization of MADD as a temperance organization is correct.

The bone of contention is binge drinking, which is generally characterized as having more than five drinks in a sitting. By that standard, I was a binge drinker for over a decade, especially during my college years. Beloit was a very boozy place in the 1980s, as were pretty much all the colleges in Wisconsin, and plenty of nights we would be just getting warmed up when we reached the five-drink mark. A number of my college friends had undeniable problems with the bottle and I know a number of people who ended up having to go through rehab and others who managed to get away from the bottle through other means. Did having an 18-year old drinking age facilitate drinking? No question about it.

But there is something else worth considering. The drinking we did was done socially, out in the open. It wasn't the sort of furtive drinking that goes on now, especially among underage drinkers. And people didn't typically drink 18 shots in an hour on their birthday; anyone who tried would usually get cut off before they got there. We did most of our drinking in the local bars on or near campus, or at parties in the union or at the Greek houses. Did people do stupid things? Heck yes. Was there a chance that you might wake up the next morning next to someone you probably wouldn't consider a candidate for a long-term relationship? Yeah, that happened, too. Fortunately the statute of limitations tends to run on those things once you get past 30.

That's the nature of being a young adult. You tend to think you're invincible. You tend to discount the wise advice of your elders. Everyone pretty much goes through a bonehead phase at some point. Tragedies occur because young people are stupid. But the key is this - in a social setting, even if a lot of the people are lit up, there's generally someone there who isn't. And the people who aren't stupid drunk usually are able to help restore order, if not common sense. And in a social setting, you can learn from your mistakes. If you are getting blasted alone in your room, fall asleep and don't wake up because you've done a Jimi Hendrix, you don't.

One of our theories during our college years was that at least half of what you learn in college is how to act at a cocktail party. And by that we didn't mean drinking; we meant that you learn how to interact with people in the proper way, in a social setting. I'm not sure how much of that goes on among young people these days. College presidents are closer to the lives of young adults than most of us are these days. It's certainly worth listening to what they have to say.


Update: The Night Writer has a fun reminisce about a particular beer-fueled road trip, along with a few thoughts about bad beer. Go read it, awright?
Posted by Mr. D at 7:21 PM

Wang Chung reference is much appreciated.

Other than the MADD mothers who essentially are trying to renact prohibition, I think most people realize that the the inconsistencies of having the age of majority at 18, and the drinking age at 21 are troubling.

Prohibition has been tried and it didn't work, unless you call setting up a scenario for the vast growth of organized crime working. Now that I think of it, didn't we get the Kennedy's because of that? I digress...

I really think that the college professors want us to start to have a real discussion regarding this issue. They make salient points, and I do agree that the time has come to revisit this issue.

I was in college back when the drinking age WAS 18 back in the 70's. The idea that college administrations float that raising the drinking age to 21 will curb binge drinking---is just damned specious. I can tell you plain; when the age was 18, everyone I know going to school in that era can recount how drunk everyone got---binging was HUGE! So, it's a canard argument...what colleges are REALLY trying to do is shift responsibility and liability. That's all it is. There's nothing "noble" going on with these pin heads. Candidly, I think we'd be better off lowering the drinking age to 18...and raising the driving age to 21! Chew on that awhile.