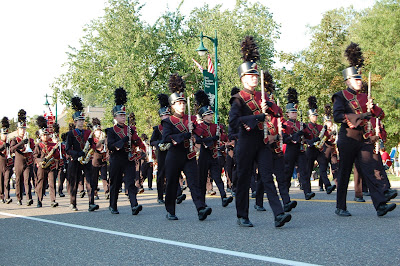 Today was the annual New Brighton Stockyard Days Parade. The parade celebrates New Brighton's long-lost heritage as a poor man's South St. Paul. I've written about the parade twice before so I won't bore you with the details, since they generally don't change that much year to year. Just a few quick observations.

- from a South St. Paul resident

A considerable chunk of Knuth's shock troops have consisted in the past of volunteers from other legislative districts with "safe" DFL seats. They don't need to work their own districts, so they come over to 50B and pretend to be homegrown Knuth supporters.

It appears that the DFL caucus may consider HD50B "safe" for them this year. I hope they keep on thinking that.

Kate Knuth, eh? My condolences to you folks amongst her constituency.

My wife was taking classes this past Summer in Environmental Education (for her Masters Degree) and Kate was a special guest speaker. Not only did she demagogue for the Enviro movement but she called the folks at the Heritage Foundation "liars".