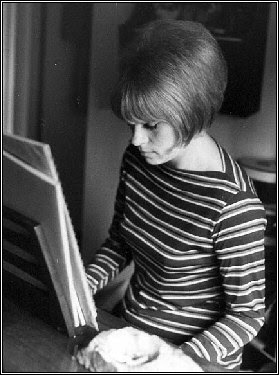 Everyone is talking about Ted Kennedy's death today, and rightly so. He was a hugely important figure in American life for much of the last 40 years. But we also lost someone else today who brought a lot of joy to the world -- songwriter Ellie Greenwich, who wrote many of the great pop songs of the 1960s, mostly with her songwriting partner and then-husband Jeff Barry. Greenwich was a contemporary of Carole King and because she wasn't as successful a performer, she was often forgotten. That's too bad, because she wrote some great songs. A lot of the songs were Phil Spector productions, but she ranged beyond that. Here are just a few of the great songs that she gave us:

Be My Baby, by the Ronettes

Leader of the Pack, by the Shangri-Las

Do Wah Diddy, by Manfred Mann

Chapel of Love, by the Dixie Cups.

Six great songs, six different performers. And it's hard to imagine the early 60s without these songs. RIP.
Posted by Mr. D at 6:04 PM

clearly, a persoon of more worthy productivity than the lifelong politician from MA.

I basically adore ALL of those songs; I had no idea who wrote them. This is a great tribute, and informative for me, too!