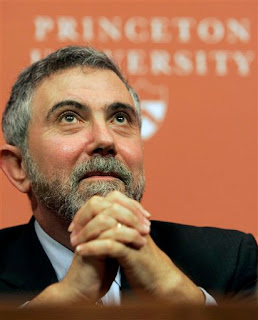 So why might you oppose Obama Care? What's the real reason? Let the most deserving Nobel laureate since Le Duc Tho or Rigoberta Menchu explain it to you:

But they’re probably reacting less to what Mr. Obama is doing, or even to what they’ve heard about what he’s doing, than to who he is.

That is, the driving force behind the town hall mobs is probably the same cultural and racial anxiety that’s behind the “birther” movement, which denies Mr. Obama’s citizenship. Senator Dick Durbin has suggested that the birthers and the health care protesters are one and the same; we don’t know how many of the protesters are birthers, but it wouldn’t be surprising if it’s a substantial fraction.

It's the Nobel Laureate as Jeff Foxworthy: You might be a racist if you oppose Obama Care. Good to know. In fact, you probably are. And a "birther," too. As we all know, anything that Dick Durbin says is probative. QED. And these guys probably disapprove of you, too.

Doesn't this make you despair? How can we ever handle all the withering scorn from our betters? Take it away, David Boaz:

The good news for advocates of limited government is that our opponents are displaying a striking lack of confidence in the actual arguments for their proposals. If they thought they could win a debate on nationalizing health care, or running trillion-dollar deficits, they wouldn’t need to reach for such smears.

i remember the mobs who turned out for the HillaryCare promotional bus tour back in 93.

was it because the clintons were white?

you know, they seen this all before. but this time they appear shell shocked by it.