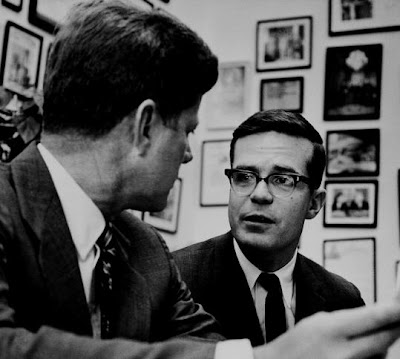 They sent Ted Kennedy off today and the level of attention that the moment received was nothing short of stunning. Kennedy got half the evening newscast on CBS and was the recipient of wall-to-wall coverage from the cable nets and from NBC, which was providing Tom Brokaw in full sonorous mode and detailed footage of hearses and government vehicles.

I understand what is driving this: the Kennedy myth is still strong in many precincts. I've always been immune to it: I don't much care for the politics of the Kennedy clan (malleable as it has been) and since it's always been my assumption that we fought a revolution in part because we were tired of having royals, the desire that some people have to treat the Kennedys as royalty has never made a lot of sense to me.

Ted Kennedy was a senator for almost 47 years. He's been hugely influential. But there are others who have served in the Senate longer. Among Kennedy's contemporaries, Strom Thurmond and Robert Byrd served even longer. Carl Hayden went to Washington to represent Arizona when it reached statehood in 1912 and didn't leave for 56 years. No one provided wall to wall coverage of Thurmond's demise and it's highly unlikely that Byrd will be lionized in the way that Ted Kennedy has been these last few days. Hayden is now largely forgotten, even though one could credibly argue that he was the single most important politician involved in the development of the western United States in the 20th century.

So how did this happen? What made the Kennedys so important? In a word, marketing. And the most important marketer of the Kennedy myth is still around. That would be Ted Sorensen, the longtime confidant and speechwriter to the Kennedys. He's the man who ghosted Profiles in Courage and he's the man who saved Ted Kennedy's butt in 1969. Scott Johnson at Powerline has the skinny:

The telltale hand of Theodore Sorensen can be seen in the allusion to JFK's (and Sorensen's) Profiles in Courage: "The stories of the past courage cannot supply courage itself. For this, each man must look into his own soul." But Kennedy's call on his constituents to render their verdict on him drew directly drew on the stratagem pioneered by then-President Richard Nixon in his brilliant 1952 Checkers speech.

And if you look at the speech, it is a brilliant stroke. After earlier invoking the names of John Quincy Adams, Daniel Webster, Charles Sumner, Henry Cabot Lodge and his martyred brother, he concludes thus:

I pray that I can have the courage to make the right decision. Whatever is decided and whatever the future holds for me, I hope that I shall have been able to put this most recent tragedy behind me and make some further contribution to our state and mankind, whether it be in public or private life.

The courageous thing for Kennedy to do, and the honorable thing, would have been to follow the example of John Profumo. Mark Steyn reminds us how Profumo handled his own scandal in Britain, some six years before:

When a man (if you’ll forgive the expression) confronts the truth of what he has done, what does honor require? Six years before Chappaquiddick, in the wake of Britain’s comparatively very minor “Profumo scandal,” the eponymous John Profumo, Her Majesty’s Secretary of State for War, resigned from the House of Commons and the Queen’s Privy Council, and disappeared amid the tenements of the East End to do good works washing dishes and helping with children’s playgroups, in anonymity, for the last 40 years of his life. With the exception of one newspaper article to mark the centenary of his charitable mission, he never uttered another word in public again.

That wasn't a course of action that Ted Kennedy could have imagined. He was too important. And the myth of Camelot and the hope of redeeming the nation, was too important. It was a lie, of course. But it could have been a lie Ted Kennedy told himself, and it could have been a lie that a more alert populace could have rejected. That he could get others to accept and endorse the lie is a testament to the power of the words and intellect of Ted Sorensen. He bought the myth 40 years.

Sorensen is now an old man and is really all that is left of the original Kennedy mythmaking apparatus. The other sorcerors who created and promulgated the Kennedy myth -- Jacqueline Kennedy Onassis, Pierre Salinger, Arthur Schlesinger, Theodore White -- have long since left the scene. The dream is dying a little more each day. And it's just as well. We need to face the world and our future as it is. And the myth that Ted Sorensen helped to create won't be especially useful to us.
Posted by Mr. D at 9:23 PM

what was created by whomever was only sucessful because there was a partisan press corps who wanted to believe it.

as in today, these same folks ignore the evidence to the contrary, and are swooned by the eloquent say-nothing of obama, annointing him as the second coming, or maybe even the first coming, of the One we've been waiting for.

like i said, ol Ted was only popular in newsrooms, and in some bastions of MA. out in the real USA, the working class, blue collar world i grew up and still live in, he wasnt much loved or trusted at all.
to us, he was just another career politician, the kind that obama campaigned against.


i'm betting the cable networks will notice thise when they realize nobody was watching this weekend.

Mark,
I believe I am already on record regarding my disdain for Teddy K., and nothing has changed that. I agree with most everything you said. However (of course there is a however), the comparison by Steyn is way off base. Our political systems and traditions are so different that comparisons of the two are virtually always off base. The comparison to Profumo is a straw man, and if Steyn wasn't such a political hack, he would be embarrassed to have made it, especially since he knows better.

In the UK, almost every PM resigns at some point, and their Parliamentary system runs on the honor code. Just ask Churchill, Blair or Thatcher. Regardless of how popular or 'great' you were, at some point, your own party turns on you. It's a bit like a self-cleaning oven. Hear in the US, Unless you've been caught with a live boy or a dead girl, you stay on till they drag you, kicking and screaming, from your elective office. If we lived by British political standards, every President since Kennedy would have done the walk of shame from the Oval office, and more than half of our Congressional leaders.
One last thing: The Profumo scandal is only comparatively minor in retrospect. At the time of the scandal, the full impact of possible leaks to Soviet intelligence wasn't known, and the story, coming at the height of the Cold War, and involving sex, was absolutely huge.

If we lived by British political standards, every President since Kennedy would have done the walk of shame from the Oval office, and more than half of our Congressional leaders.

Look, I know it's not analogous. Having said that, Ted was verlucky to have done what he did in 1969 rather than, say, 1999. Spitzer and McGreevey, to use just two examples, ended up resigning office for far lesser offenses. Standards change and my guess is that because of the unresolved outrage involving the Chappaquiddick case, the standards were tightened for later politicians.

Steyn isn't wrong about the virtues of resigning in shame, either. If Ted Kennedy had any shame, he would have resigned. He's not the only one who should have resigned, of course. I'd recommend a similar course of action to David Vitter, to name just one example on my side of the aisle.