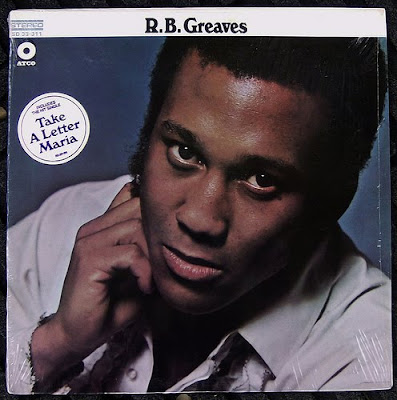 Fearless Maria is back in the house and this time, I'm driving. Dad, you know what's the best part about that?

What is it, Maria?

Now you have to be the voice in the italic type! I'm driving this bus and you're going to have to get off at the next stop if you don't watch your step, buddy!

You've put me on notice, haven't you?

Yes, I remember it. I turned 6 at the end of that year. Started kindergarten, too!

So let's get started. First, we have this weird guy that I never knew existed, but his name is R. B. Greaves, and he wants someone, maybe even me, to:

It sounds like this Maria is supposed to be his secretary. Back in those days men often had secretaries and they would type letters for their bosses.

Why? Were they too busy being lazy bums to type their own letters? They must not have had the skills to pay the bills! And why did his recorder start bursting into flames at the end? Apparently since can't type his own letters, his mission was impossible!

Sounds right, Maria. I'm guessing you would have had a lot to say about life in 1969.

Well, the whole thing makes me suspicious. And Elvis Presley seemed to be pretty suspicious, too, because he has:

Dad, Elvis looks a little sweaty there, don't you think?

Well, I'm thinking that white jumpsuit he was wearing was probably made of some strange polyester fabric.

Why did Elvis seem to change outfits in the middle? You know what, Dad? I'm pretty sure he was lip-syncing on some of this. So Elvis is being pretty suspicious with his own mind. That's what I think.

Actually, I especially like his sideburns. Those are pretty impressive. You could build a bee's nest in those things!

Plus, he's shaking his butt a lot. Wasn't he a little old for that by then? I don't think the girls were swooning over that stuff by then!

Well, you'd have to ask those girls, but they aren't girls any more.

I bet some of the girls might have looked like this lady in the next song. It's a group called Smith, with:

Well, first of all, I think there's a little mistake in the lyrics on this one, Dad.

What is that, editor?

Number one, I'm thinking she didn't touch this "Baby" person's heart. She probably stabbed it with that pointy headband thing! And also, I think it was the belt that was torn apart.

No, that's fringe, Maria. A lot of people wore fringe outfits back then, including most of this band, apparently.

They seem like they belong out on the fringe, Dad! But I did think the song was, well, interesting. But maybe she was overdoing it a bit with the "NOBODY NOBODY" business. Maybe nobody wants to hear that screaming!

Good point, Maria. So what's next?

Well, it's just Sly and the Family Stone, all wearing really huge hair and if you ask me, they sure don't look like:

Holy smokes, Dad! Sly's hair is as tall as the Willis Tower!

What you talkin' about, Willis?

Dad, they renamed the Sears Tower the Willis Tower. Try to keep up, slow Daddy-O. I guess the rest of the band had an unexpected trip to the hair salon.

Well, considering how long they'd grown it out by then, if they showed up at any hair salon it probably was unexpected, don't you think?

Yep. And it wasn't very smart, either, because their hair was so big that it didn't fit in the camera frame and it looked like they had their heads cut off!

Technology has gotten a little better since then, fortunately.

Nice hair, Johnny Cash! You seem to be the only person who owned a comb in 1969. The song is some story, though! I wouldn't want to be named George or something like that!

Here's something you might not know, Maria. Johnny Cash was singing that song for a bunch of inmates at San Quentin Prison in California. Some of those guys in the audience were pretty rough dudes.

I wonder if any of their names were Sue?

I'm pretty sure that were all named Bill or George or any old thing, but not Sue.

Well, don't sue me, but it's time for everyone to vote! And if you don't vote, we may have to send you to the Neighborhood Prison, which might not be as bad as San Quentin, but, ooh, it's a tough place! Don't try to survive on mush -- vote in the comments section! Anything else you want to say, Dad?

I think that went well. But you still don't get to drive the Santa Fe.

(and maybe punch some air holes in it.)

It figures that a guy with multiple on-line aliases would go for something entitled "A Boy Named Sue". (Might be a great name for a blog, though!) I'll cast my vote that direction as well; this was a favorite around our house when I was a kid and I can't believe how I still remember the whole song practically word for word.

One day musical archeologist will look at this as the first rap song. It's got everything: fatherless boy an a never-ending quest for respect and to get revenge for being "dissed"; gun and knife violence. Of course, when Cash wrote this, a hoe was just something you used in your garden.